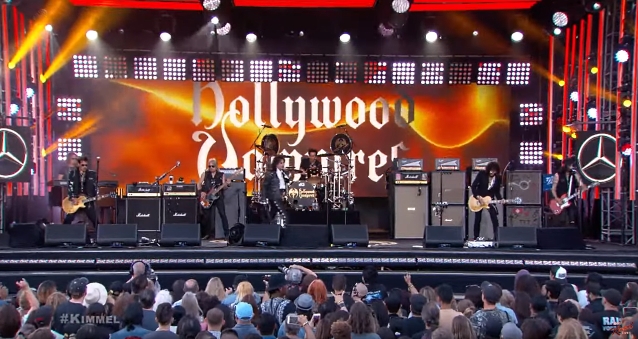 HOLLYWOOD VAMPIRES were the musical guest on last night's (Wednesday, June 19) episode of "Jimmy Kimmel Live!" The band performed two songs, David Bowie's "Heroes" and their own "I Want My Now", on the show's outdoor stage in front of a standing-room-only crowd.

The band's second album, "Rise", will be released on June 21 on earMUSIC as a CD digipak, 2LP+download and digital. The disc was produced by Tommy Henriksen and the HOLLYWOOD VAMPIRES.

Unlike HOLLYWOOD VAMPIRES' 2015 debut record, "Rise" consists mainly of original material, written by the band. There are however, in the spirit of the VAMPIRES' original mission, three covers of songs originally written and recorded by some fellow rockers who died far too young: an intimate and intense version of "Heroes", again beautifully performed on record by Depp; the JIM CARROLL BAND's "People Who Died" and Johnny Thunders's "You Can't Put Your Arms Around A Memory", sung by Perry.

"We're really excited about the new record, there's no doubt," Joe told Coachella Valley Weekly. "After the last one, we went out and played pretty much the whole record. It was a cover-record kinda thing, but we knew that the band, when we hit the stage, we knew the band had a lot more to it than just covering some great old songs and paying homage to some of our friends that have passed away. We were really excited about finally getting in the studio and writing some new stuff and then going out and playing it live. Alice is amazing to play with. Again, everybody has had tons of time in the studio. Johnny's been working in and out of the studio for years, everybody has. Really, it's about getting on stage and playing live. We actually played quite a few songs from the new record on the last tour."