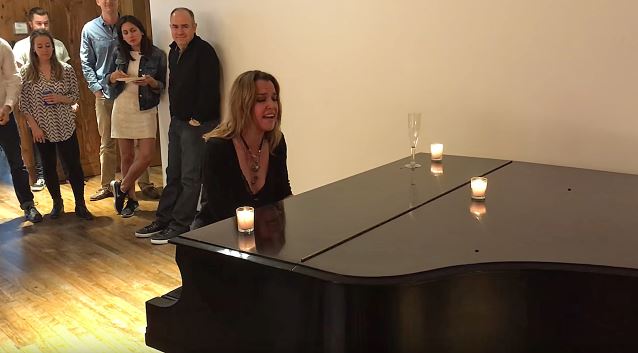 Video footage of HALESTORM singer Lzzy Hale performing the band's song "Dear Daughter" solo on piano on April 26 at the Atlantic offices in New York City can be seen below.

In an interview with RockSverige.se, Lzzy stated about the track: "This is a subject that… I mean, obviously, [HALESTORM drummer Arejay and I] grew up with a very supportive mother. We decided to start a rock band, and she actually said, 'Yes! Do that! Go for it!' So, for me, this was… We get to speak to a lot of young girls, and a lot of them do have those supportive parents, but a lot of them don't. So I think this was my way — lyrically, at least — just passing that on… As in, like, if I were… if and when I were to have a daughter, I would be passing these words on to her… I don't know… It's a strange song."

Added bassist Josh Smith: "It's a strange song, but [with] a great message. And although it says 'Dear Daughter', that's just great advice for anyone… be it a young kid, or anyone in a spot where they're, like, 'Man, I'm in just the pits right now. What the hell's my life gonna be like in ten years?' So it's just good sound advice for anyone kind of trying to find their way."

The band's third effort, "Into The Wild Life", which features "Dear Daughter", debuted at No. 5 on the Billboard 200 album chart, selling 56,000 copies in its first week of release — more than double the first-week haul of their second CD — but has not reached gold yet.