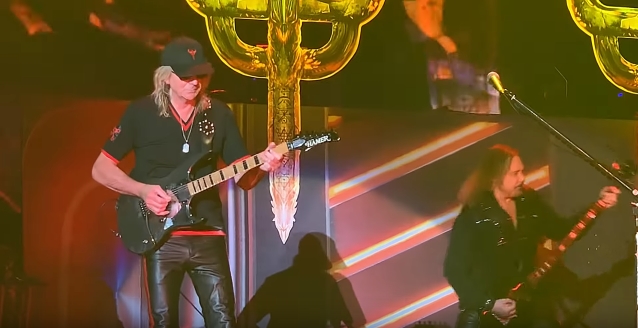 Guitarist Glenn Tipton rejoined his JUDAS PRIEST bandmates on stage on November 28 at Tokyo Dome City Hall in Tokyo, Japan and November 29 at Musashino Forest Arena in Tokyo to perform the two concerts' three-song encore: "Metal Gods", "Breaking The Law" and "Living After Midnight". Fan-filmed video footage of both shows can be seen below.

In a recent interview with the Detroit Metro Times, JUDAS PRIEST bassist Ian Hill spoke about the health status of guitarist Tipton, who revealed in February that he has Parkinson's disease. "We've known for a while," Ian said. "He was diagnosed before the ['Redeemer Of Souls'] tour, actually. And of course, when we rehearsed for the last tour, he was very rough to start. But as the days went on, he got better and better, so by the time we were done rehearsing, he was raring to go. And we were expecting the same thing to happen this time around, and, unfortunately, it didn't, you know? He had to admit to himself that his body wasn't going to let him do it anymore. It was a very sad moment. We could all see it. He was trying and trying and fighting."

He continued: "I can't imagine what he's going through, I really can't. It's not as if he's been stupid and fallen off a motorcycle or whacked out on drugs or something like that. It's something completely out of his control. Having said that, he's as good as anyone can be given the situation. Glenn is out with us most of the time, anyway. And when he's feeling well enough, he'll get on stage, and I can't promise anything, but he'll get up and do the encores with us."

PRIEST singer Rob Halford said in an interview that the band is planning to mark its 50th anniversary in 2019 with a special celebration, although he declined to offer any details.

Hill is the sole remaining original member of PRIEST, which formed in 1969. Halford joined the group in 1973 and Tipton signed on in 1974. Rob left PRIEST in the early 1990s to form his own band, then returned to PRIEST in 2003. Founding guitarist K.K. Downing parted ways with the band in 2011, and was replaced by Richie Faulkner.

PRIEST will return to the United States next May for a run with fellow classic heavy rockers URIAH HEEP. 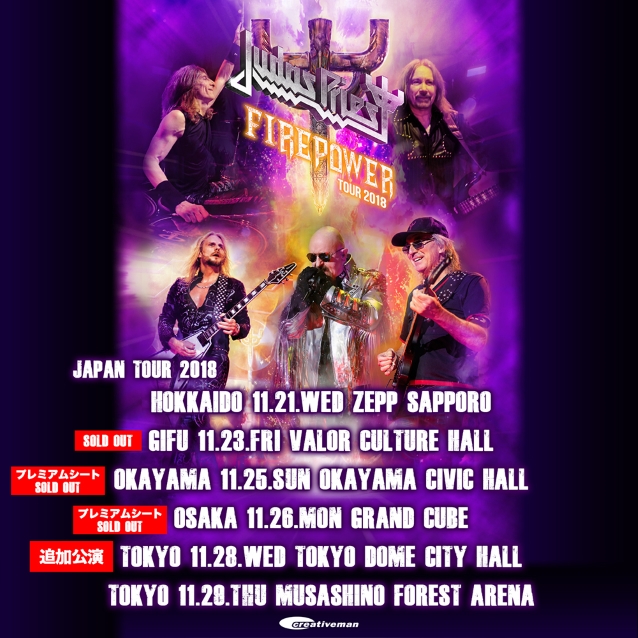