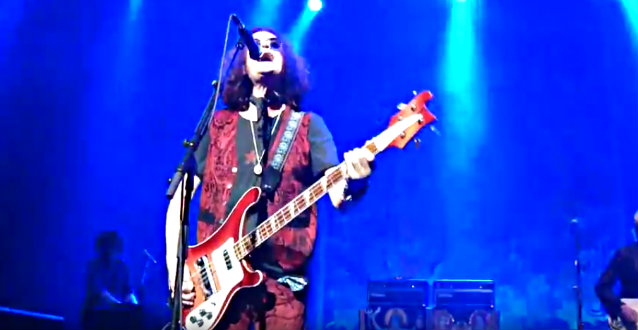 Fan-filmed video footage of Glenn Hughes's October 3 performance at ASB Theatre in Auckland, New Zealand can be seen below.

Glenn Hughes is continuing his tour of New Zealand and Australia — one week after doctors said he was suffering from dehydration.

The former DEEP PURPLE bassist/vocalist was assessed by doctors in Christchurch last Wednesday after being forced to cut short the first New Zealand show due to what witnesses called "some sort of a medical event".

But in a video message, Glenn said that he would carry on with the rest of the tour. "[The Christchurch show] was a bit of a hiccup," he said. "I had dehydration from not drinking enough water. Note to self: Mr. Hughes, drink water."

Hughes spent the night after the Christchurch concert at a hospital after leaving the stage at Horncastle Arena with fifteen minutes remaining in his set. He later wrote that he "felt dizzy" and "couldn't make the full show." He added that he "played for one hour and forty-five minutes when" he left the stage, assisted by his tech.

Hughes and his backing band — Jeff Kollman, Lachy Doley and Pontus Engborg — are revisiting some of DEEP PURPLE's best-known songs for the first time on the current trek.

Hughes played his last show with DEEP PURPLE in March 1976, three years after joining the band.