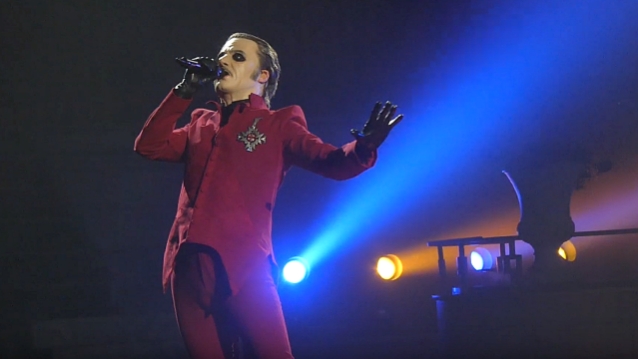 Fan-filmed video footage of GHOST's October 24 concert at Giant Center in Hershey, Pennsylvania can be seen below.

The band's live set includes two new songs, "Kiss The Go-Goat" and "Mary On A Cross", which are both included on a new limited-edition seven-inch single, released last month.

GHOST is continuing to tour in support of its latest album, "Prequelle", which was produced by Tom Dalgety and originally released in on June 1, 2018. The album was nominated for a Grammy Award as "Best Rock Album", and for Sweden's Grammis award as "Best Rock/Metal Record Of The Year", and Dalgety received a Grammy nomination as "Producer Of The Year." Both Revolver and Kerrang! magazines named "Prequelle" the best album of 2018, and the album produced three Top 10 singles — "Rats", "Dance Macabre" (both of which went to No. 1 at Rock Radio) and "Faith". To date, "Prequelle" has accumulated some 250 million streams globally.

Forge performed as a "new" Papa Emeritus on each of the band's first three LPs, with each version of Papa replacing the one that came before it. Papa Emeritus III was retired in favor of Cardinal Copia before the release of "Prequelle".