Fan-filmed video footage of GHOST's July 21 performance at Luzhniki Stadium in Moscow, Russia as the support act for METALLICA can be seen below.

In a recent interview with Impericon, GHOST leader Tobias Forge said that METALLICA is "one of the most important bands for me — has been for a long time. Definitely a band without whom I probably wouldn't do these things," he said. "I wanted to be a rock musician before I knew, or before I was enamored with METALLICA, but they definitely inspired me. When I was a kid and liked THE ROLLING STONES and PINK FLOYD and Jimi Hendrix and all that, they were clearly from another time doing something that sort of belonged to the past, whereas METALLICA, when I started listening to them, they were very much current and they were very now. They were the biggest band in the world at that time, and still are. But they inspired me in many, many ways. And nowadays, of course, I get the amazing opportunity to be inspired and be taught, firsthand, by a band that I've spent so many years learning from from a distance."

Last December, Forge told the American Forces Network about the prospect of doing a full tour with METALLICA: "[I'm] very stoked. All of us grew up listening to METALLICA, and they're definitely one of my absolute favorite bands, and very much one of the reasons why I'm doing this. Of course, it means a lot. They've gone from being very far-away idols to over the years becoming basically mentors. They've been so supportive. We've played with them before, but never a consecutive tour like that, so to be able to do a full-on European stadium tour, that's a huge endeavor."

GHOST's latest album, "Prequelle", debuted in June 2018 at No. 3 on the Billboard 200 chart. The band will embark on a North American tour this fall in support of the disc, starting on September 13 in Bakersfield, California and wrapping on October 26 in Glens Falls, New York. 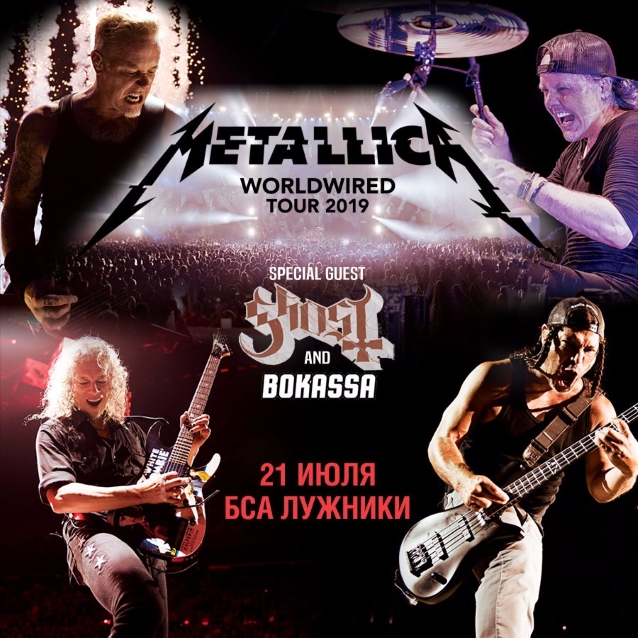