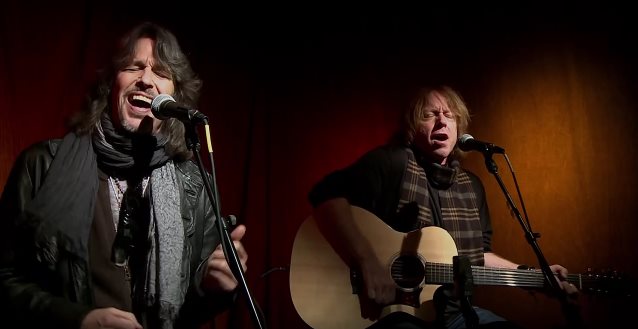 Kelly Hansen and Jeff Pilson of FOREIGNER recently dropped by the "Nights With Alice Cooper" studio to perform an acoustic version of the band's song "Feels Like The First Time". Check it out below.

Singer Lou Gramm recently confirmed that he and the other founding members of FOREIGNER will join the group's current lineup "for a song or two" at a concert on the band's upcoming tour.

Gramm and guitarist Mick Jones's June 2013 performance of "I Want To Know What Love Is" and "Juke Box Hero" at the Songwriters Hall Of Fame in New York City marked the first time the pair has performed together in a decade after Gramm left FOREIGNER for a second time. Hansen has fronted the group since 2005. Jones is the sole remaining founding member in FOREIGNER's current lineup.