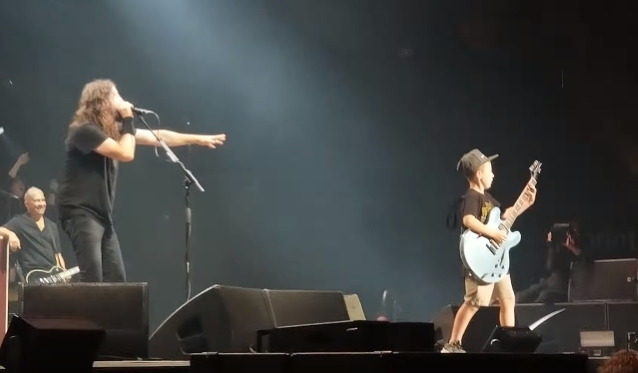 A 10-year-old boy played a cover version of a classic METALLICA song with the FOO FIGHTERS in Kansas City, Missouri. The impromptu performance took place this past Friday, October 12 during FOO FIGHTERS' concert at the Sprint Center.

At one point during the show, frontman Dave Grohl called up Collier Cash Rule on stage and asked him if he could play guitar. When the kid responded that he was a METALLICA fan who knew how to play "a lot of METALLICA songs," Grohl asked him if he wanted to break into a METALLICA track. Collier responded "Sure," and proceeded to play the main riff to the METALLICA classic "Enter Sandman". Grohl threw his arms in the air as the rest of the FOO FIGHTERS joined in, with Grohl putting on his best James Hetfield impression while singing the first verse of the song followed by the chorus. Grohl then asked Collier if he knew another METALLICA song, after which the 10-year-old launched into "Welcome Home (Sanitarium)" and a bit of "Wherever I May Roam" before Grohl admitted the boy knew more METALLICA music than the FOO FIGHTERS did.

Although Collier was initially reported to be seven, his mother confirmed to local TV station KMBC that he is actually 10, and that he has been playing guitar for two years, practicing before and after school every day.

Grohl and his bandmates were so impressed by Rule, the boy was given the guitar after the song concluded.

"If I see that shit on eBay next week, I'm gonna find you, Collier," Grohl joked as Collier made his way back to his mom in the stands.