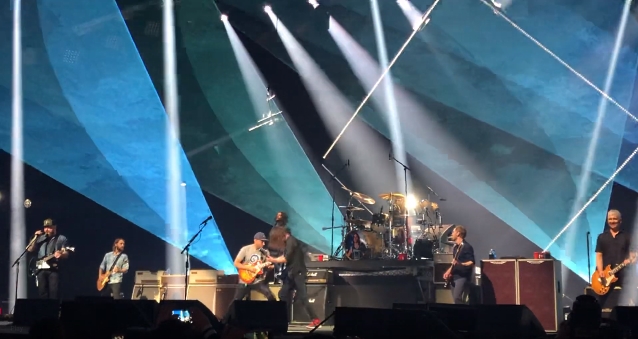 Zac Brown and Tom Morello joined the FOO FIGHTERS onstage at their sold-out pre-Super Bowl concert Saturday night (February 2) in Atlanta to perform a cover of BLACK SABBATH's "War Pigs". Morello, Brown and the FOO FIGHTERS were then joined by Perry Farrell for a rendition of JANE'S ADDICTION's "Mountain Song". Other guests included QUEEN's Roger Taylor (who played drums during "Under Pressure") and saxophonist Dave Koz.

"I don't know when y'all are gonna see us again, but you will," FOO FIGHTERS frontman Dave Grohl told the crowd at last night's concert. "Because we're too fuckin’ old to break up. It's like your grandparents getting divorced. It's not gonna fuckin' happen."

FOO FIGHTERS are continuing to tour in support of their 2017 album, "Concrete And Gold". Although the disc reached the top of the Billboard chart, it failed to earn gold certification in the sales department. But the band remains a touring behemoth, having played 71 shows between June 2017 and June 2018, with an average gross of more than $1 million per stop.