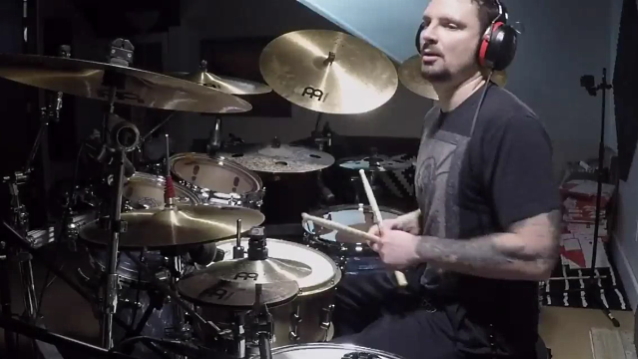 FIVE FINGER DEATH PUNCH drummer Charlie "The Engine" Engen has uploaded a video of him playing through the song "Broken World". The track is taken from the second instalment of FIVE FINGER DEATH PUNCH's greatest-hits collection, "A Decade Of Destruction - Volume 2", which was released on digital and CD formats in October, with a two-LP set arriving in November via Better Noise Music.

"A Decade Of Destruction - Volume 2" includes four previously unreleased tracks: "Broken World", a Steve Aoki remix of "Bad Company", a Joe Hahn remix of "Wash It All Away", a Felmax remix of "Trouble" and a new acoustic version of "Wrong Side Of Heaven".'

Engen was named the replacement for FIVE FINGER's original drummer, Jeremy Spencer, in the fall of 2018. Last June, Charlie told the "Rock & Roll Beer Guy" podcast how his life has changed since he joined FIVE FINGER: "Financially, it was amazing, because it was the first time I had any sort of balance in my life. I've always been 'feast or famine' my entire existence, which, on one hand, has been good, because it taught me a lot of different things. And I never gave in to 'The Man' sort of a thing, so I always kept my head on my shoulders. I had corporate jobs and whatnot, but they'd last a year before I'd be, like, 'All right. I can't do this anymore.' So as far as financially, it was just great to get some stability in my life.

"Money-wise, not to beat it to death or get into details with it, at first when I joined them, it was right into a tour, so it was contract based, because they didn't know if they'd keep me around…," he revealed. "So that was contractual. Now we're just word-of-mouth agreement, essentially, because that's the way they like to operate, and I prefer that as well. You don't feel like you're getting treated like a fill-in puzzle piece. They did a great job of making me feel like a bandmember out of the gate, knowing that, obviously, from my angle, coming into a freight train that's moving a thousand miles an hour that's already now established as a premier rock band. And for them, like, 'Hey, we got this new guy on. Have fun.' They were really good about keeping it all cool, and it never felt, like, 'All right, man. Don't screw this up,' or anything like that.'

He added: "Yeah, it started as a contract, and now it's just word of mouth. And it's nice — it feels good. Especially getting a record under the belt now too — it helps. It's a great situation for me."

The 36-year-old Engen, who was previously identified only as "a drum prodigy" called "The Engine", played his first show with FIVE FINGER DEATH PUNCH in November 2018 in Wichita, Kansas.

Engen made his recording debut with FIVE FINGER DEATH PUNCH on the band's latest album, "F8", which came out in February 2020.