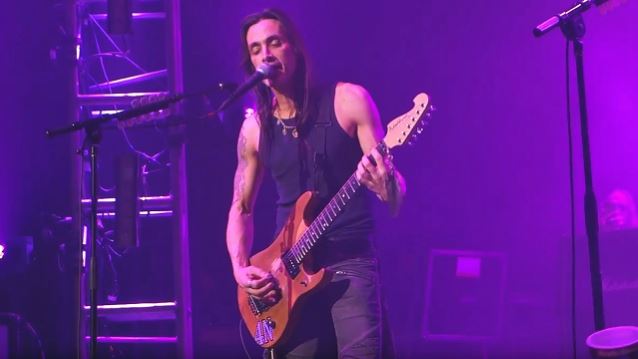 Nuno Bettencourt (EXTREME) paid tribute to Prince by performing a snippet of the iconic artist's classic song "Purple Rain" this past Thursday, April 21 at Hard Rock Live in Orlando, Florida during the "Generation Axe" tour.

After the concert, Nuno posted a message expressing his grief over Prince's death and thanking the fans in Orlando for joining in during the "Purple Rain" performance. He wrote: "Tonight was supposed to be a night of guitars... So I have to thank you, Orlando, for giving me just a few minutes of your time and your voices and your hearts, to help me heal... and allow me to shed a few tears. I really needed that. And I know he heard you."

He added: "Prince... The joy you have given me throughout my life, the way you made me move. You taught me to learn all instruments, not just to be a guitarist, but a musician, an individual. That the priority wasn't the skill, but the emotion behind it. And the songs, the way you'd make my pain go away when I couldn't bear it. The songs you have given all of us to play for the ones we adore when we couldn't find something deeper to say than just... I love you. You truly are and will always be an actual prince... Love you."

Prince's body was discovered this past Thursday, April 21 in the elevator of his Minnesota estate Paisley Park. The sheriff's office later released a statement saying they were "continuing to investigate the circumstances surrounding his death," but had no further details. Foul play and suicide are not suspected.