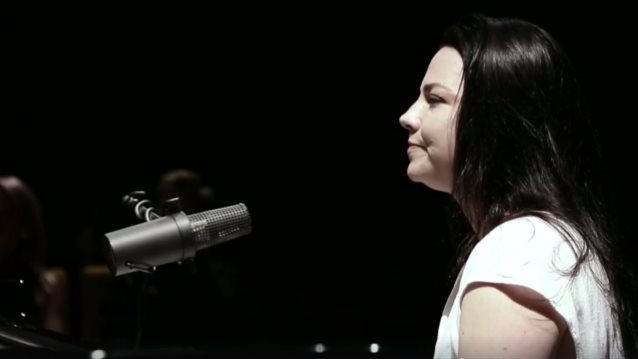 EVANESCENCE singer Amy Lee took part in a question-and-answer session and one-song live performance Tuesday night (October 3) at the Steinway Hall in New York City. You can now watch the event via the Paste Facebook page below.

EVANESCENCE's new album, "Synthesis", is due on November 10. The effort features full orchestration in a completely synthetic world of beats and sounds, with help from arranger and composer David Campbell.

Living up to its name, "Synthesis" is a combination of organic and synthesized sounds, taking a selection of EVANESCENCE's three previous studio releases along with two new songs — first single "Imperfection" and "Hi-Lo" — and re-imagining them as brand-new recordings. "Synthesis" is an amalgamation of Lee's masterful singing and piano playing, supported by her band, a full symphony orchestra performing arrangements by longtime collaborator David Campbell as well as an array of electronic music programming and effects engineered by co-producer Will Hunt — not to be confused with the band's drummer of the same name — and mixer Damian Taylor (Björk, THE KILLERS, ARCADE FIRE) who also collaborated with the band on the album.

Amy Lee from Evanescence live at Steinway Hall in NYC