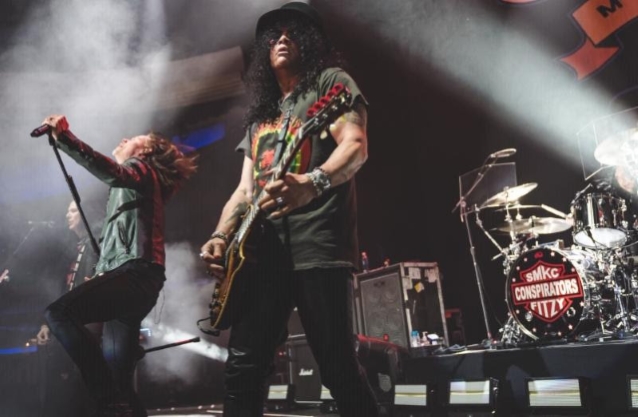 The iconic Grammy-winning guitarist Slash and his band SLASH FEATURING MYLES KENNEDY AND THE CONSPIRATORS wrapped their nationwide, sold-out headlining tour — their first in four years — on Tuesday night (October 16) at the Palladium in Hollywood, California. The group ripped through a 22-song, electrifying two-hour show which included a special guest appearance from GUNS N' ROSES bassist Duff McKagan on a rendition of the GN'R classic "It's So Easy". The band which, in addition to Slash and singer Myles Kennedy, includes Todd Kerns (bass), drummer Brent Fitz (drums) and Frank Sidoris (rhythm guitar) will continue touring worldwide in support of their acclaimed new album, "Living The Dream", which spawned the first single "Driving Rain", officially a Top 5 hit at rock radio.

"Living The Dream" was released on September 21 via Slash's own label Snakepit Records. It is Slash's fourth solo album and third since putting together the CONSPIRATORS.

The "Living The Dream" sessions, which commenced in late March, saw the band reunite with producer Michael "Elvis" Baskette, who also helmed 2014's "World On Fire". But while the producer stayed the same, the studio this time changed, with Slash opting to move operations to his newly active recording facility, Snakepit Studios.

GUNS N' ROSES' "Not In This Lifetime" tour launched in April 2016 with a nightclub gig in Los Angeles and has more dates booked this fall.

The apparently final leg of the trek will kick off in Mexico on November 3 and wrap up in South Africa on November 29.