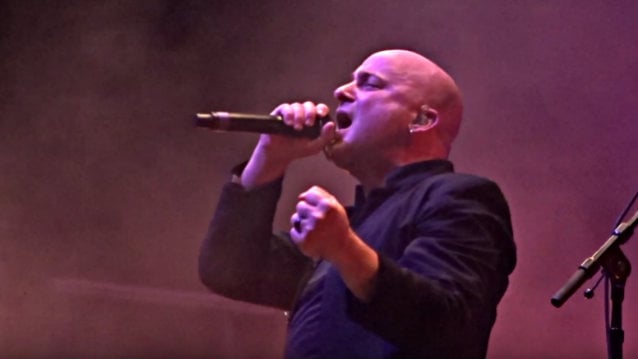 Fan-filmed video footage of DISTURBED's entire March 16 concert at Stadium in Moscow, Russia can be seen below.

DISTURBED has just completed a European tour as the support act for AVENGED SEVENFOLD.

As previously reported, DISTURBED plans to return to the studio later this year and record an acoustic EP before starting work on its next full-length studio album.

The idea of DISTURBED doing an acoustic EP is not a foreign concept for the band. Singer David Draiman spoke a while back, saying DISTURBED has always wanted to put melody in its music. "There's a huge contingency of kids that want stuff that they can just bash their head open to, you know, and that's great," he said. "We provide that as well. But to us, when we make our music, it has to be fused with melody. The aggression and the power needs to be harnessed with hooks that stay with you."

Draiman said that the band will probably record its seventh full-length album in 2018 for release later that year, with touring to take place in 2019.

An acoustic EP now could also capitalize on the success DISTURBED has had with its cover of SIMON & GARFUNKEL's "The Sound Of Silence", which has been a massive hit that has introduced the band to new audiences.