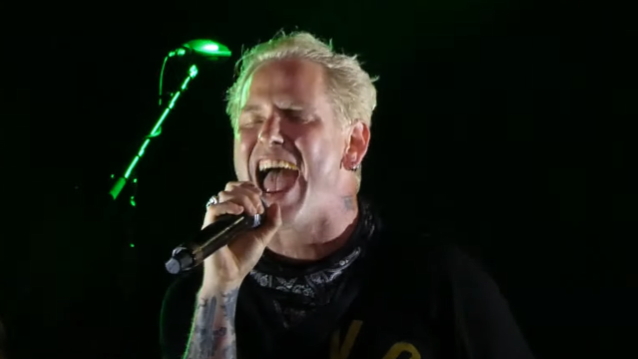 Jason Christopher, who plays bass in Corey Taylor's solo band, has uploaded a short video of him, the SLIPKNOT and STONE SOUR frontman and Corey's guitarist Zach Throne singing along to DURAN DURAN's classic song "Rio" backstage at a recent stop on Taylor's current solo tour (with drummer Dustin Schoenhofer air drumming behind them). Check it out below.

Back in 2015, Taylor shared his views on the state of modern music, comparing pop to "listening to a piece of wood." Speaking to Loudwire, he said: "I feel like I'm being stung by a thousand bees all at once. It’s so Auto-Tuned, it's so beat-corrected, it's so canned and processed and lifeless… I mean, you might as well be listening to a fucking piece of wood at that point.

"It bothers me, because I put so much into everything I do, I put so much into my music — I bleed for it and die for it every god damn night, you know?" he explained. "To watch these people basically let a computer go through the motions and do all the work for them, it's insulting to everyone out there who has more talent and less attention."

Corey kicked off his solo tour, "CMFTour 2021", on May 17 at the Marquee Theater in Tempe, Arizona. Taylor's set includes anthems from his critically acclaimed solo debut "CMFT", choice cuts from his SLIPKNOT and STONE SOUR catalogs, and various covers and surprises.