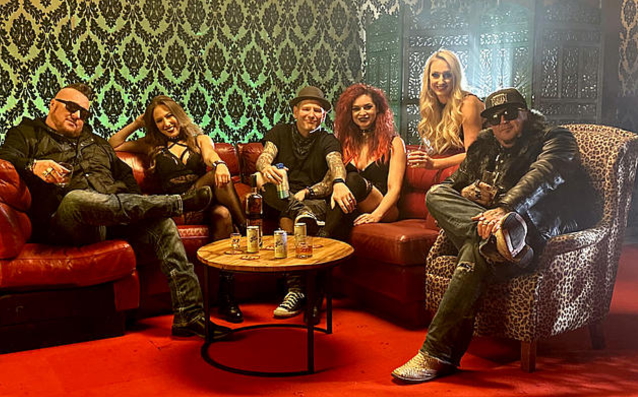 SLIPKNOT and STONE SOUR frontman Corey Taylor is featured in "Live The Madness", the new music video from MOONSHINE BANDITS, the American country rap group composed of Dusty "Tex" Dahlgren and Brett "Bird" Brooks. The clip, which can be seen below, also features Corey's wife Alicia Taylor, a professional dancer and a member of the all-girl dance group CHERRY BOMBS.

"Live The Madness", featuring Corey on guest vocals, is taken from MOONSHINE BANDITS' latest album, "Fire", which came out in 2020.

Since their formation in Los Banos California in 2003, the MOONSHINE BANDITS have continued a campaign of crossover genre-bending musical mayhem that appeals to the eclectic, color-outside-the-lines tastes of listeners, a.k.a. The Shiners, and they fiercely refuse to have their tastes confined and filed into categories.

The MOONSHINE BANDITS have crisscrossed the country performing hundreds of shows a year, ventured into branding their own beef jerky and moonshine, collaborated with some of the music business’s most prolific artists, outshined in the face of record industry roadblocks, earned a fiercely loyal fan following, and embrace the unconventional. It's all part of a journey filled with good, bad and even some ugly, but ultimately the MOONSHINE BANDITS philosophy is summed up by Tex and Bird's joint statement: "We always felt there aren’' stops or boundaries if you pave your own lane."