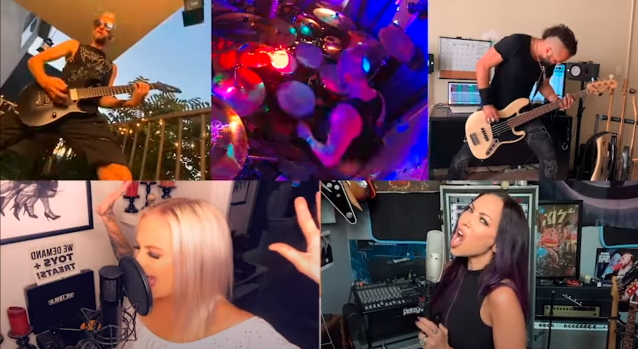 BUTCHER BABIES are scheduled to release a new single in the coming days. The song will be the first taste of the band's forthcoming fourth studio album, tentatively due in early 2021 via an as-yet-undisclosed record label.

Asked in a new interview with Syfy Wire's "Metal Crush" how BUTCHER BABIES' new LP differs from 2017's "Lilith", singer Heidi Shepherd said: "It differs a lot. You still have the classic BUTCHER BABIES metal behind us, but I found myself wanting to sing more.

"When I first started BUTCHER BABIES, I was an angry young girl, and I had a lot to scream about. I'm a happy 35-year-old woman now, so I have a lot that I wanna sing about."

BUTCHER BABIES next album will be the band's first since its split with Century Media over a year ago.

This past April, Shepherd told ELUVEITIE's "Corona Talk" that "it was a hard decision to part ways with Century Media." She explained: "Here in the U.S., the label doesn't exactly exist much here anymore,. And so it was a really difficult decision. We were with them for our entire career; we've been a band for 10 years. It just wasn't working here in the States. But we do love our Century Media family."

In July 2019, longtime BUTCHER BABIES bassist Jason Klein announced his departure from the band. He has since been replaced by Ricky Bonazza.