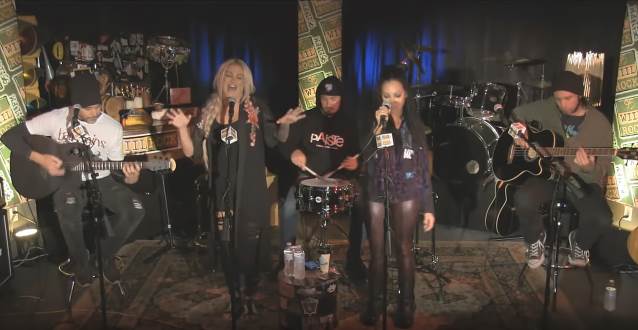 BUTCHER BABIES recently took part in an interview and acoustic performance at the studios of the 95 WIIL Rock radio station in Kenosha, Wisconsin. You can now watch video footage of thier appearance below.

BUTCHER BABIES' third album, "Lilith", was released last October via Century Media. The follow-up to 2015's "Take It Like A Man" was produced by Steve Evetts (THE DILLINGER ESCAPE PLAN, SEPULTURA, SUICIDE SILENCE) and marks the band's recording debut with new drummer, Chase Brickenden, who replaced Chris Warner in 2016.

BUTCHER BABIES co-vocalist Carla Harvey told Meltdown Of Detroit's WRIF radio station that the music on "Lilith" "runs the gamut" from "great thrash metal" to "a little bit of '90s influence." She said: "We're singing, we're screaming and it's just a great, great album. I couldn't be prouder of it. I think there's four songs where we do predominantly singing on it. And normally that would scare even me, 'cause I'm, like, 'I'm a metal girl! I don't wanna be singing.' But it's so beautiful — it really is. So it's kind of ballady, but not too ballady. It's very dark, sensual — the lyrics are very sensual on this album."

Asked what the most challenging aspect of being in BUTCHER BABIES is, co-singer Heidi Shepherd told Psycho Babble TV: "I was telling someone that I think at ten years is when you're supposed to get jaded, so I have another year left. I'm just kidding. [Laughs] The thing is, we wake up every day and we love what we do and when we step onstage, it's a new day. There are days when you wake up in your bunk and you're not feeling your best. Your voice hurts, or your back hurts. Or, maybe you had a tiff with one of the band members, but when it comes down to it, we're five best friends first and foremost. We're five best friends who get to tour the world and do cool shit together. We keep that in mind and that's the reality of it. With 'Lilith', this album, we call it our 'rebirth.' We did take a year off to write and record, but we also had a member change that brought a whole new, fresh energy into the band. Even just looking at things from a different perspective, like slightly sometimes, offers a rebirth."