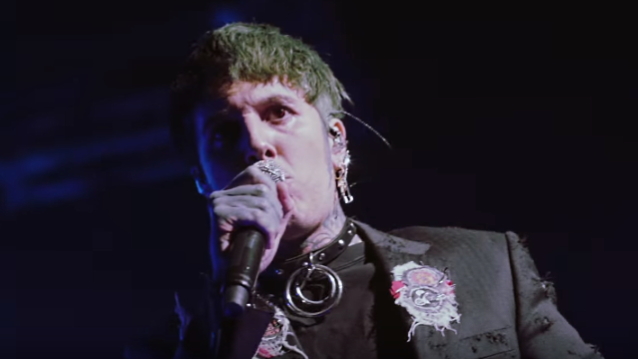 British rockers BRING ME THE HORIZON have released a new official live video of their performance of the new single "Ludens" in Tokyo, Japan, where they played as the support act for BABYMETAL.

Speaking to Kerrang! about how "Ludens" came together, singer Oli Sykes explained: "Now we've put six albums out, and we've made such different music over the course of that, we've learned what works and how you can change stuff up. It's really just playing with that and pushing it to its limit. We felt like, after [this year's] 'Amo', the structures of which were mostly very pop-oriented, we wanted to do something a bit more unmethodical, I guess. We weren't thinking that we were going to take bits of everything we've ever done, but we decided that we can do stuff that we might not have done on 'Amo', and just do whatever we wanted, really."

BRING ME THE HORIZON is one of the most electrifying and successful rock bands to emerge from the U.K., selling over four million albums globally to date, playing sold-out shows in over 40 countries, including two sold-out nights at London's O2, plus wowing a traditionally non-rock crowd at Glastonbury Festival in 2016 and 2018 and stealing the show at high-profile festivals across Europe all summer 2018.

BRING ME THE HORIZON — Sykes, guitarist Lee Malia, bassist Matt Kean, drummer Mat Nicholls and keyboardist Jordan Fish — is continuing to tour in support of the critically acclaimed "Amo" album, which NME called "bold, brilliant and boundary-pushing" and which Noisey hailed for "being ahead of their time and evolving a genre."

The album's endless highlights include "Mantra", "Medicine", "Mother Tongue" and the Grimes collaboration "Nihilist Blues", which NME hailed as "the album's centerpiece, a glitching rush of dark '90s Eurodance to soundtrack the blackest of raves. It's an anthem for millennials who feel like there's nowhere to go."