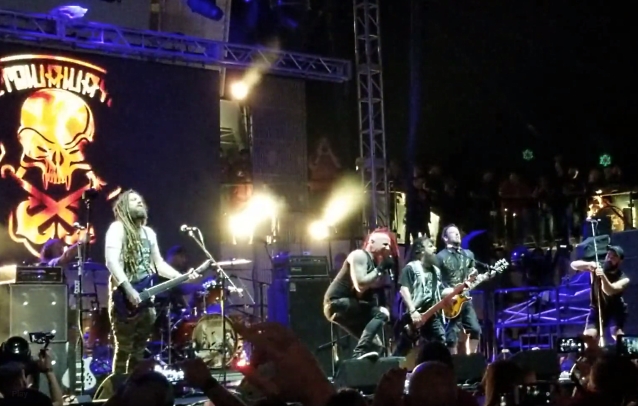 KORN's Brian "Head" Welch and HELLYEAH's Chad Gray joined other members of an all-star supergroup known as THE STOWAWAYS to perform a cover version of the KORN classic "Blind" aboard this year's ShipRocked cruise. Fan-filmed video footage can be seen below.

ShipRocked 2019 set sail on January 26 from Galveston, Texas, making stops at Cozumel and the Yucatán in Mexico along the way, before returning to Galveston on January 31.

HELLYEAH is putting the finishing touches on a new album, to be released later in the year. The LP will mark the group's final effort with drummer Vinnie Paul Abbott, who passed away in June 2018.

KORN is currently working on material for a new album, tentatively due in the fall. The follow-up to 2016's "The Serenity Of Suffering", which is once again being produced by Nick Raskulinecz, will feature songwriting collaborations with GOLDFINGER's John Feldmann, while BLINK-182's Travis Barker recorded the "temporary drums" on some of the early demos.