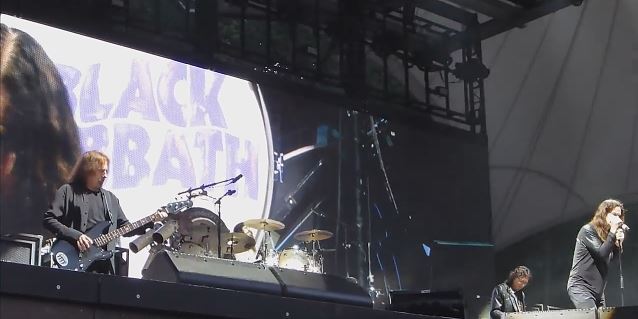 Fan-filmed video footage of BLACK SABBATH's June 8 performance at Waldbühnein in Berlin, Germany can be seen below.

Nearly five years to the day that the legendary BLACK SABBATH announced they would be reforming, the band will play their last show ever in the U.S. November 12 at AT&T Center in San Antonio, Texas.

This just-announced performance is one of three headlining arena concerts the band has added to the final North American leg of their massive 2016 "The End" world tour. The new shows are November 8 at BOK Center in Tulsa, Oklahoma; November 10 at Toyota Center in Houston, Texas; and November 12 at AT&T Center in San Antonio, Texas. These dates and the previously announced headlining slot at this year's 20th anniversary celebration of Ozzfest (Saturday, September 24 at the Ozzfest Meets Knotfest double-header music and lifestyle weekend) come at the end of the band's North American tour, which kicks off August 17 at Nikon At Jones Beach Theater in Wantagh, New York. The 2016 "The End" world tour and the Ozzfest Meets Knotfest are both produced by Live Nation.

The greatest metal band of all time — Ozzy Osbourne (vocals), Tony Iommi (guitar) and Geezer Butler (bass) — are currently on tour in Europe for a mix of summer headlining and festival performances, before returning to North America in August. Immediately following the November U.S. shows, BLACK SABBATH will head to Mexico and then South America where they will wrap up their 2016 dates.

BLACK SABBATH is selling a new limited-edition CD titled "The End" at the shows on its farewell tour. The disc features four previously unheard studio tracks left off the band's 2013 reunion album, "13", as well as live versions of four songs from the world tour the band did in support of that disc.