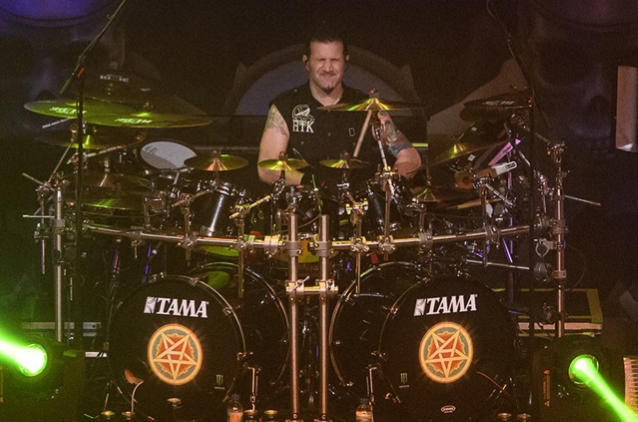 ANTHRAX drummer Charlie Benante has uploaded an Instagram video of him playing the SLAYER song "At Dawn They Sleep" with the members of the latter band during soundcheck. The clip, which was apparently filmed earlier today before the two groups' joint concert in Auckland, New Zealand, can be seen below.

Benante wrote in an accompanying caption: "This made my day! Playing "at dawn they sleep" with @slayerbandofficial thanks again @paulbostaphofficial @anthrax @paistecymbals #hellawaits"

A year ago, Benante said that he had "known for a while" that some of the members of SLAYER had been contemplating calling it quits.

SLAYER, one of metal's most popular and influential bands of the past four decades, announced its "final world tour" in January 2018.

In an interview with Jason "Bakko" Bakken of the "Cobras & Fire" podcast, Benante was asked how felt about SLAYER pulling the plug on an impressive three-and-a-half-decade career.

"I think I've known for a while now that some of the guys in the band maybe were feeling it a bit at this point, and I can totally understand that, because I feel it too," the drummer said. "I guess when I saw [the announcement], it kind of hit home with me a bit. I actually got a feeling of putting a time stamp on things.

"I never look at age," Benante continued. "The only time I look at age is when someone brings it to my attention or someone posts my birthday in the papers and stuff like that; that's when I look at it. Or nowadays, it's become really common for the people that I looked up to who are now passing on. So when SLAYER put that [announcement] out, it kind of hit me in a way that was, 'Fuck, man! This ride is… Maybe we're all coming to the end of our ride here a bit.' And I think it probably startled a lot of people, both musicians, both the fans.

"I think life is starting to catch up to all of us," Charlie added. "Fans are just… I think they're all worried now that, what's gonna be left? These shitty bands that are coming up now?"

Benante went on to say that he understands why so many people have a hard time letting their most cherished musicians retire gracefully. "I think the fans want these bands to live on forever, and, of course, so do I," he said. "But there's so many factors into this. Do you wanna go see your [favorite] band and do you wanna come out of it going, 'Oh my God! That was terrible. They barely could play.' Because I've witnessed that. And it's, like, 'Ooh, man.' You feel bad. And you don't want your favorite artist or favorite band to go out like that, but yet there's a part of you that's, like, 'No, no, no. Nostalgia, man. I still need this in my life. Don't do this to me.'

"There's one thing you have to remember: it could either be a song, it could be a movie or whatever, it's always gonna take you back to that place where you were probably most happiest," Charlie continued. "And that's a big thing, especially for all of us, to go back to a place that was safe, happy. You had no responsibility. Who cares? Who cares what time it is? I don't give a fuck. It's, like, remember the days of just staying up all fucking night just to finish a video game and not worry about the next day. I mean, things like that. Being on tour, staying up all night, drinking, listening to music, bonding, and then getting up the next day and doing it all over again. And not having the weight of the world, not having anxiety about what's someone gonna tweet today. I mean, it's crazy."