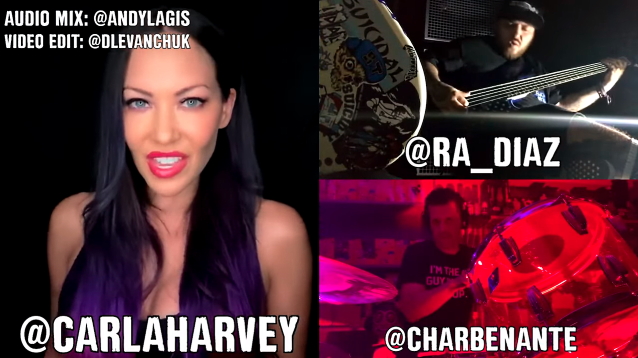 Charlie Benante (ANTHRAX) and his longtime girlfriend, Carla Harvey (BUTCHER BABIES), have uploaded their cover version of MASSIVE ATTACK's "Teardrop" song, filmed while they were in quarantine. Playing bass on the track is Roberto "Ra" Diaz (SUICIDAL TENDENCIES).

Benante uploaded a video of the performance to his YouTube channel, writing in an accompanying message: "I was on tour in the UK/Europe when I got Mezzanine by @massiveattackofficial . I think it was 97/98 and I remember laying in my Bunk and being absorbed by the Music I was hearing. This was different than The Protection Record; It was Darker and the layered instruments created a dense listening experience...this album comes eerily close to giving me an out of body experience

'There aren't a lot of albums that can put me into a deep trance and keep me there for a long time, but this album does that amazingly well. The tracks really take their time to develop, and that mostly results in stunning instrumentals. Teardrop was one of those songs that I wish I'd Wrote, to this day it still gives me goosebumps. I always wanted to do a 'remix' or 'my version'. I had the chance during this Quarantine/Stay at home Situation to make that happen. I asked @ra_diaz and @carlaharvey to Help make it happen.

"The video is not like the normal Quarantine Videos, I wanted it to be Dark and Artsy Farsty ( like an MTV vid).

"Carla Knocks it out of the park, she brought that vibe to the song and showed a different level I knew she had. Ra is On Point with the Rumble and groove, He always makes it look so easy.

"Once again Thanks to @andylagis for the Mix, I know there was a lot to deal with but you Placed it all in the right spots

"@dlevanchuk made a great video, not like a standard 'quarantine Video'. He took his imagination and went somewhere with it.