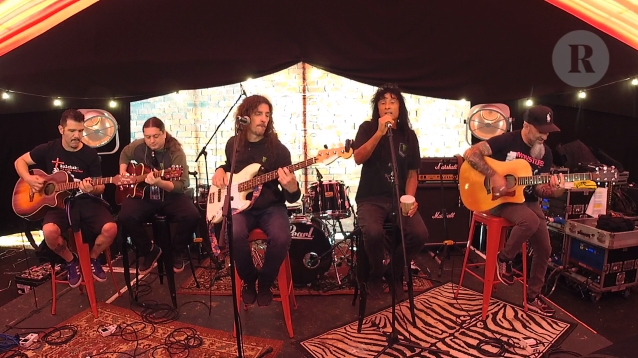 ANTHRAX played an acoustic set over the weekend at this year's Download festival at Donington Park in Leicestershire, England. The event was part of Zippo Encore's "Zippo Sessions", exclusive, intimate acoustic sessions with some of the hottest bands playing at the major festivals that the company booth attends. Watch video footage of the performance below.

ANTHRAX guitarist Scott Ian recently spoke to Rock Hard about the progress of the songwriting sessions for the band's follow-up to 2016's "For All Kings" album. He said: "It's still very skeletal. But we have some really strong skeletons. Like, not shitty skeletons — really strong skeletons with flaming swords, like from an old Sinbad movie or something. Yeah, we've got some really cool stuff. I think there's five now really great ideas — just music; musical arrangements. I haven't even really given it any thought yet. Probably after this summer's done, like when we finish in August, we'll have some time in late August and in September where we're gonna be off tour, and I think that's probably when I'll start thinking about what I wanna say. But I'm really, really happy with the music. It sounds great. The riffs are fucking awesome. And yeah, I'm really excited about it."

"For All Kings" was called by some critics ANTHRAX's strongest album to date. Its arrival followed a five-year period during which the band experienced a rebirth of sorts, beginning with ANTHRAX's inclusion on the 2010 "Big Four" tour with METALLICA, SLAYER and MEGADETH, and continuing with the 2011 release of comeback LP "Worship Music".

The group's upcoming disc will be ANTHRAX's third full-length release since the return of singer Joey Belladonna, who came back into the fold for the "Big Four" shows, in the process helping inspire a new wave of creativity.