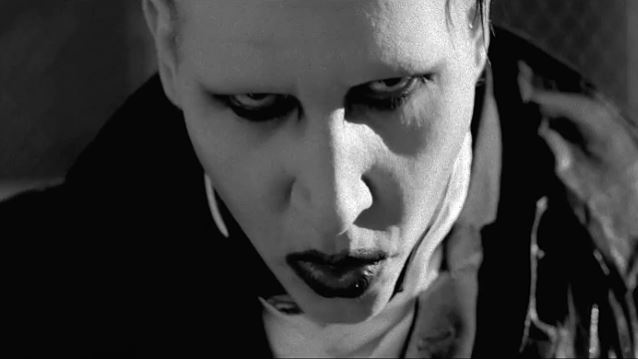 The animated video for Marilyn Manson and Shooter Jennings's cover version of David Bowie's "Cat People (Putting Out Fire)" can be seen below. The clip was directed by Valenberg and Blake Judd.

The Manson/Jennings version of "Cat People (Putting Out Fire)" appears on Shooter's latest album, "Countach (For Giorgio)", which honors Bowie and electronic/disco legend Giorgio Moroder. Moroder produced the original Bowie song for the soundtrack to the 1982 film "Cat People", although Bowie later recut the song for 1983's "Let's Dance" album.

"I invited [Manson] out to a party at this bar, and I said, 'Hey, you know 'Cat People'? You want to do that song on this record, 'cause you'd sound awesome doing it,'" Jennings told Rolling Stone of how the unexpected partnership came about. "And he was, like, 'I sing that song every night before I go onstage. That's my song I warm up to.' So one night I went over to his house at three in the morning and brought all my recording gear."

He added: "What's awesome about Manson is all the people I've worked with who are singers always overanalyze their performance and want to recut shit or use a different take. He's none of that. His house is cavernous and looks like a bordello and it was his voice echoing through the house. It was pretty intense."

Manson recently penned a moving tribute to Bowie, saying: "Every song of his was a way for me to communicate to others. It was a sedative. An arousal. A love letter I could never have written. It has become and remains a soundtrack to a movie he painted with his voice and guitar."

Manson's latest album, "The Pale Emperor", was released in January 2015 via his own label — Hell, etc. — in a joint venture with Cooking Vinyl.