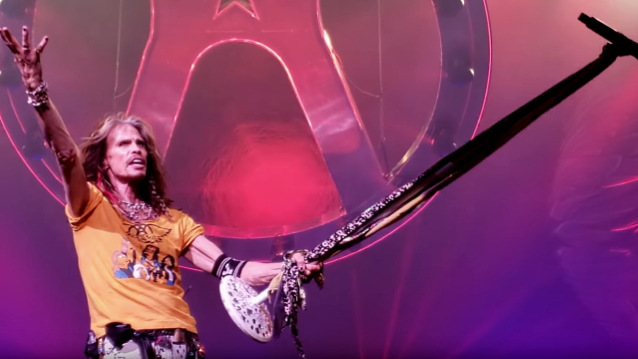 Steven Tyler took a tumble during AEROSMITH's concert Thursday night (August 8) in Maryland. The incident happened while the singer was in the middle of performing "Walk This Way". A fan-filmed video shows Tyler taking a misstep and then falling before a roadie goes over to help him. Being the true professional that he is, Tyler kept singing while lying on his back on the stage, and finished the show as if nothing had happened.

"We've been doing a residency in Las Vegas for MGM and we're just trying to bring a little bit of what we're doing out there at their Las Vegas casino to National Harbor," guitarist Brad Whitford told WTOP about the shows. "There's a very great piece of video we'll show everybody that's a little historical in showing different things over almost 50 years of doing what we do. You get a little bit of insight into each guy in the band. … Then, of course we play, which is the easy part."

Asked what fans we expect to hear from the setlist, Whitford said: "We mix up a few things in the set on a daily basis. We always do a little bit of stuff we did in the early days and right up to today. Sometimes we change it a little bit, more for ourselves, I think, than the audience. So we always have a few surprises. Sometimes a song will be like 10 minutes before we go on, like, 'We're going to do this song!' And I'm like, 'Okay, I think I remember this.'"

AEROSMITH is scheduled to play 17 more shows in Las Vegas before the end of the year — four in September, four in October, seven in November, and two in December. The band also has multiple-night "Deuces Are Wild" engagements booked at MGM properties in Atlantic City, New Jersey; and Springfield, Massachusetts.