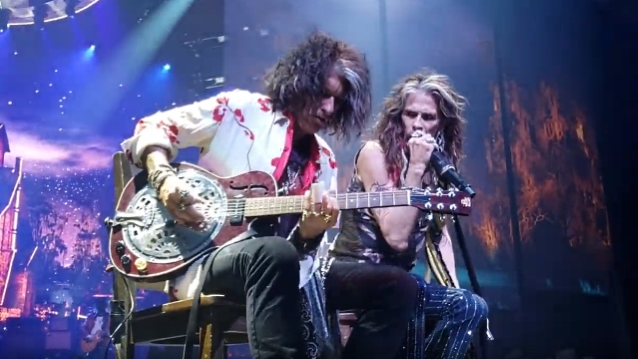 Fan-filmed video footage of AEROSMITH's April 26 concert in Las Vegas, Nevada can be seen below. The show marked the second consecutive performance the band played without drummer Joey Kramer at the Park Theater at Park MGM as part of AEROSMITH's "Deuces Are Wild" residency.

Earlier in the week, Las Vegas Review-Journal columnist John Katsilometes tweeted out a statement from AEROSMITH's management which explained that Joey "had a minor accident and is totally fine, but he hurt his shoulder in the process." Filling in for Kramer at both concerts was Kramer's drum tech, John Douglas.

AEROSMITH kicked off its "Deuces Are Wild" Las Vegas residency on April 6. The band is scheduled to play 27 more shows in Las Vegas dates before the end of the year — one in April, five in June, four in July, four in September, four in October, seven in November, and two in December. The band also has multiple-night "Deuces Are Wild" engagements booked at MGM properties in National Harbor, Maryland; Atlantic City, New Jersey; and Springfield, Massachusetts.