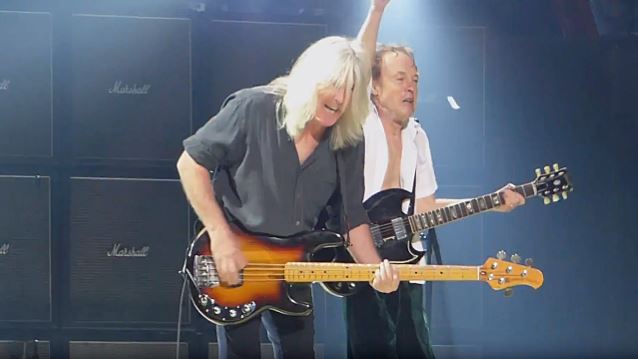 AC/DC played what is believed to be the band's last-ever concert with bassist Cliff Williams Tuesday night, September 20 at the Wells Fargo Center in Philadelphia, Pennsylvania.

Earlier in the day, AC/DC released a video message from Williams in which he confirmed his plans to retire from recording and touring with AC/DC once the touring cycle for the "Rock Or Bust" album had been completed. Williams explained: "It's time for me to step out, and that's all. Not because we've lost Mal, Phil or Brian. I mean, everything changes when something happens like that. When Bon died, it changed then. You know, everything changes, so it's not that. It's just… I'm just ready to get off the road, really, and do what I do."

Williams added: "In between tours, we take a few years off, so I know how to do that, I know what I'm gonna do. Again, it's just my time. I'm happy. I just need to . . . Family time now . . . just chill out and not do this. I mean, I couldn't have asked for anything more, being with the people I'm with and have been, and being in this situation with this band, playing this music."

Williams's decision follows a string of personnel changes for the group that started with co-founding guitarist Malcolm Young's departure in 2014 after he was diagnosed with dementia. Last year, drummer Phil Rudd was sentenced to house arrest after he was found guilty on a drug charge, while earlier this year singer Brian Johnson was forced to step down or face the loss of his hearing.

The 66-year-old Williams is the longest-serving member of the group after co-founder and sole original member Angus Young. He joined the band in mid-1977 and made his debut on its fifth album, 1978's "Powerage", appearing on every record and tour since.

Assuming neither Rudd nor Johnson return, Williams's exit means that only Angus remains from the lineups that recorded classic albums like 1979's "Highway To Hell" — the last album recorded with late lead singer Bon Scott — 1980's "Back In Black" and 1981's "For Those About To Rock...We Salute You".

The Philadelphia concert was the last of ten North American dates that were rescheduled after Brian Johnson had to leave the tour. As with the band's European shows earlier in the summer, the vocals were handled by GUNS N' ROSES lead singer Axl Rose.

The band does not have any more shows on its itinerary at the moment and Angus Young has not indicated for certain whether the band will continue on.