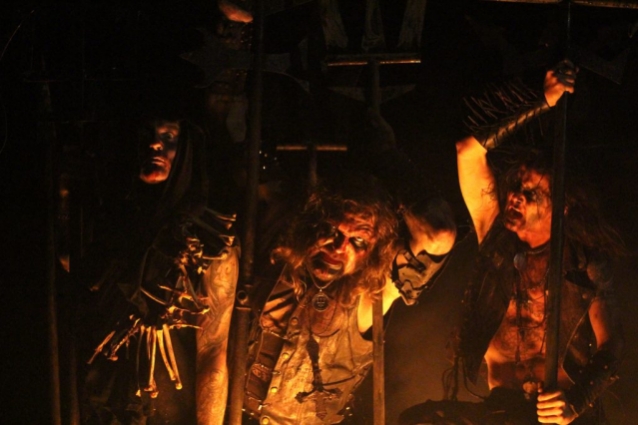 Swedish black metallers WATAIN have been forced to perform on their U.S. tour as a four-piece after guitarist Pelle Forsberg was denied entry to the country.

Earlier today, WATAIN released the following message via social media: "We regret to inform you that US authorities has decided to ban WATAIN's guitarist Pelle Forsberg from entering their country. Erik, Alvaro, Hampus and Emil have after a week of uncertainty just arrived in the States, unfortunately not in time to go through with tonight's show in Houston.

"Here is what happened: Upon his entry to the States last week, Pelle was unprovokedly taken into custody, locked up in a cell and interrogated during an entire night, only to finally have his newly approved US Working Visa -which he has been granted 5 times prior to this one- revoked and made void. He was thereafter deported back to Mexico where he had been prior to the tour. This radical and fatal decision, made by a random custom officer who happened to be on duty that day, was based on google searches on WATAIN made during the Pelle's incarceration, as well as private pictures found on his phone of motorbikes, hunting and various things related to Satanism, Black Metal and counter culture in general. Stuff this officer didn't understand, or like.

"As if this was not enough, the US border authorities furthermore also decided to direct their suspicion towards the rest of the band as well, one day before we were scheduled to leave, forcing us to discard of our tickets and stay home.

"However, after several days and nights of hard and excruciating -and obviously ridiculously expensive- work from lawyers and management (anyone who has tried to question a claim made by US authorities in the past years could possibly relate here), we were finally given permission for the other four WATAIN members to enter the States. This means WATAIN will be forced to perform as a four piece on this tour, with Alvaro on guitar and Erik handling bass and vocals. We have barely had time to rehearse, and since Pelle has many other duties in WATAIN other than playing guitar, many things have had to be re-organized. We have already lost several thousands of dollars in lawyer costs, new last minute flights, new visa embassy appointments and so forth.

"We do not ask for your pity here, everyone who chooses to do what we do has to be prepared to meet opposition in all its shitstained, imbecile shapes every now and then. But we do ask for your understanding. And if you want to truly support WATAIN in this critical time, coming out to the shows and buying tour merch will now be more appreciated than ever, since the economical damage is quite severe already. Other than that, this entire debacle has only filled us with more anger and force, now ready to be unleashed on the 26 shows ahead.

"Pelle had nothing illegal on his phone. He did not behave suspiciously or provokingly. All this comes down to one grumpy officer doing the last hours of his shift, disapproving of Pelle's appearance, private life or ways of expression. We would like to remind you that this is not a cautionary tale from 1980s Soviet, this is Trump-administered border policy in today's United States. This is what you get with an imbecile, Christian, racist ape ruling the nation and 'defending it at all cost' from anything that can be considered alien and therefore unacceptable and potentially dangerous."

In a separate statement, Pelle said: "All this started with a personal vacation in Mexico to experience Dia de los Muertos, before going to the States to start rebuilding the stageshow for this tour. I got stopped at the border control in Atlanta, apparently I was red flagged because I already had a return ticket to Mexico the day after (cheaper to get the ticket like that). But all good, I had NO bullshit on me, with me or whatever. All papers/visas were under control. But then they proceeded with checking my phone to see 'who I was' basically. After that, they had me interrogated by 4 different officers for 7 hours. Then they asked me fill out a form where I responded 'yes' to 'have you been treated bad by any officer', and then all hell broke loose. Never in my life was I ever treated this shit! No information, no phonecalls, if I asked about something I just got a 'shut up, we are making the rules!' screamed at me. Got thrown into a cell with just a bean bag as a bed next to a toilet. Bright lights all night for 8 hours.

"I don't have any illegal stuff on my phone nor a criminal record. For sure some pics can be disturbing for 'normal people'. I don't live a normal life. It's pics of me riding bikes with friends (that may have a questionable club patches/bikes etc), me chopping heads off road kills, welding weird things that look 'frightening', pics from tours where obviously weird shit happens all the time etc etc etc. Again, nothing illegal, no bullshit! Of course they also started to google WATAIN and of course they stumble upon these lowlife fuckfaces that accuse WATAIN of being a right wing band. This tiresome lie that has been going on for a while now, didn't really help me in this situation. And in the end, this is just about a little border officer that didn't like what he saw and read on the internet, who in turn decides that I, one of the founding members of WATAIN, CAN'T JOIN THIS TOUR!

"Be sure that I will fight this because this 5 year ban from the States has ABSOLUTELY no ground at all! But to all of you crazy fuckers out there!
WATAIN never surrenders! Alvaro takes my guitar and Erik takes the bass once again! Join them! FUCK THE WORLD! I'll be back!"

We regret to inform you that US authorities has decided to ban Watain's guitarist Pelle Forsberg from entering their... 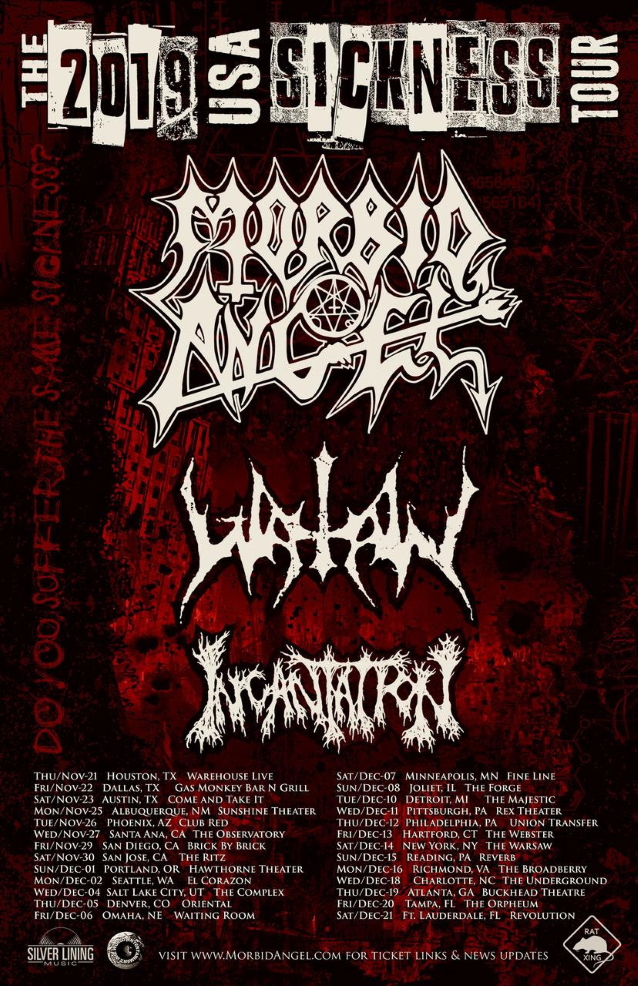