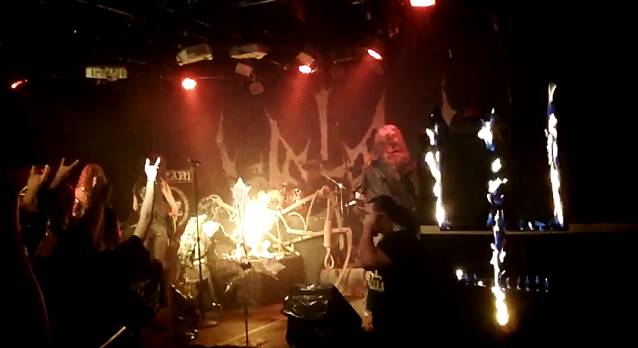 Swedish black metallers WATAIN played their only U.S. show of the summer on Sunday, June 15 at the Brooklyn Bazaar in New York. Fan-filmed video footage of the concert can be seen below.

According to TMZ.com, WATAIN frontman Erik Danielsson "present[ed] the audience with a goat skull full of animal blood... then drench[ed] the crowd. [The members of the band] use REAL pig's blood. You hear audience members shriek... and we're told some barfed and cried. Shockingly... cops say no one complained. And no one has heard a peep from the health department."

WATAIN's fifth full-length, "The Wild Hunt", sold around 2,700 copies in the United States in its first week of release. The CD was released on August 19, 2013 in Europe and August 20, 2013 in USA via the group's own label His Master's Noise through Century Media Records.