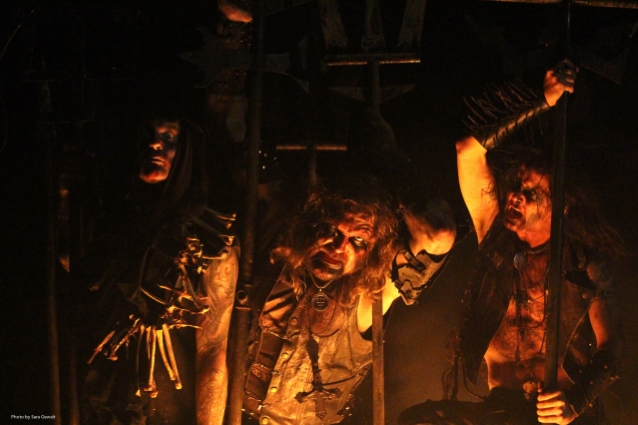 WATAIN has slammed Singapore's "tragic excuse of a government" and the "honorless rats" who were responsible for the cancelation of the band's concert in the country.

The Swedish black metallers were scheduled to perform in Singapore on Thursday evening, but the show was scrapped that same afternoon by the Infocomm Media Development Authority (IMDA), following "security concerns" raised by the Ministry of Home Affairs (MHA).

The next day, the members of WATAIN took to their Facebook page to voice their displeasure over the concert being called off.

"In the light of yesterday's events in Singapore, we would like to send a proud hail to our fans and followers from Singapore, Indonesia, Sarawak, Burma, Laos, Phillipines and Malaysia who had travelled to see yesterday's performance but were robbed of their experience in the last minute by Singapore's tragic excuse for a government," the band wrote.

"It was an honor to meet you all yesterday and to sense the fire in your eyes and in your spirits. We look forward to the day we can perform for you without the interference from lesser men.

"To the honorless rats behind the ban, rest assured that you in your cowardly act have only stirred the cauldrons of your own misfortune. If these men and women didn't already feel mistrust and contempt towards 'authorities,' they sure do now. The flames of discontent have once again been kindled, may they scorch your heavens..."

In an interview with Today, WATAIN frontman Erik Danielsson said that he was a bit surprised by the concert cancelation.

“We were setting up as usual as we have been doing the past 60 days on this tour and right in the middle of the working day, around three o'clock, we were informed that the government has chosen to cancel the show," he said

Earlier today, Singapore's home affairs minister K. Shanmugam defended the decision to call off the WATAIN show, saying that the band could not have been allowed to perform in the country due to its anti-Christian song lyrics.

"I saw the lyrics — it's four-letter words on Jesus Christ, on Christianity, on religion, abusing the cross, everything that is so far out that I can't see how we could have agreed to it," he said, according to Channel NewsAsia.

"The Christian preachers, when they talk to me, say, 'You are very, very strict when it comes to anti-Muslim, anti-Islamic messages."

Citing examples of a Danish cartoon and "The Satanic Verses" book by Salman Rushdie that were banned in Singapore, he continued: "They said: 'What these people are saying is far worse, it is a hundred times worse about Christianity. How come you would allow that?' They said: 'You treat the Muslim community differently than the Christian community.' I looked at it and I thought that there is some truth to what they say. I won’t say that it is completely true, but it is an approach."

A day before the WATAIN concert was scheduled to take place, a petition launched on the Change.org web site called for the band and fellow Swedes SOILWORK to be banned from performing in Singapore. As of Saturday, the petition has gathered more than 18,000 signatures. SOILWORK is scheduled to perform in Singapore on October 29.

The petition, which was addressed to the Minister for Culture, Community and Youth Grace Fu, described the bands as "not (representing) the culture which we want in our youths." It added: "Their subliminal messages in their songs include death and suicide."

In the light of yesterdays events in Singapore we would like to send a proud hail to our fans and followers from...