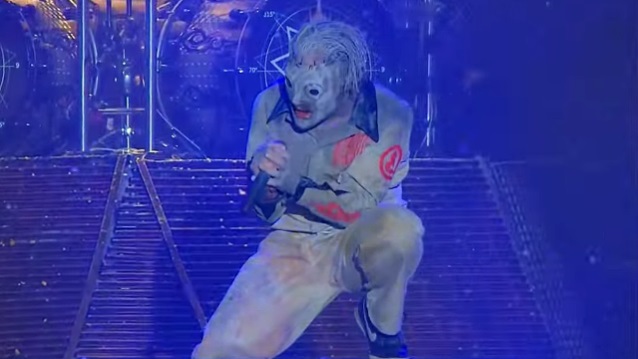 SLIPKNOT has posted the lyrics for "The Negative One", the first new song released by the band in six years. The track is taken from the group's upcoming fifth album, which is due out in October. The disc follows up 2008's "All Hope Is Gone" and is the band's first without founding bassist Paul Gray, who died in 2010, and drummer Joey Jordison, who was let go late last year.

With lyrics like "The Lord Of Lies / You Had To Be Set Free / Opposing Sides / Your Choices Are The Negative One And Me." it is speculated that "The Negative One" was written about Jordison, who was assigned "1" as his numbered alias shortly after the band's formation.

"The Negative One" lyrics:

Fire And Caffeine
A Lot Of Nicotine
I'm Going To Burn So I Better Tell You Everything
The Competition
The Superstition
Never Mind 'Cause You're Never Going To Give In
It's A Crisis, Just How You Like It
The Same Drama In A Different Disguise
I'm Bound To Walk With A Target On My Back
At Least I'm Ready For Another Attack

Svengali
Why Are We The Enemies?
I Never Follow And I Never Make Apologies
Your Dementias Are Gonna Getcha
Because Your Walls Can't Support Each Other
Settle For The Cynical
You're So Political
You're Getting Ready 'Cause The First Move Is Critical
Reciprocity
Somebody's Listening
What Did We Learn From Our Time In Captivity?

No Accountability
Divisibility
I Point A Finger But It's Always Looking Back At Me
The Centipede's Pulling On The Mechanism
Unearthing Scars Of The Cataclysm
When The Innocent
Begin To Circumvent
The Color Fades But The Picture Is Vibrant
What Do You Believe?
Does It Matter Now?
Turn Away
The Killer Is Disavowed

SLIPKNOT singer Corey Taylor told The Pulse Of Radio that fans will have to wait a bit longer for things like the new drummer's identity and the record's title. "We're keeping a lot of that under wraps, out of fairness, because we want the music to speak for itself," he said. "We don't want people listening to our music and making up their minds about something before they even know what the music is. So trust me, you know, when the time is right, we will give you the answers that you need, and that's the way it is."

Taylor told the BBC that "The Negative One" is not the official first single from the album, explaining, "That was just a gift for the fans, like we wanted them to hear a piece of the album. The single [titled 'The Devil In I'] comes out in a few weeks and it's completely different. It's more melodic, but it's dark, it's powerful man, its something different, people are going to lose their minds when they hear that."

The singer told The Pulse Of Radio that Gray's death forced the band's remaining members pulled closer together in the studio. "It was almost like getting to know each other again," he said. "We were all kind of grieving in our own way and dealing with things in our own way, and knowing that we had to be healthy to go in, we had to be creative to go in, and knowing that we were gonna have to fill this huge void, we just kind of took it upon ourselves to make up for that emptiness by being a little bit of Paul. Like we were all a little bit of Paul in our own way."