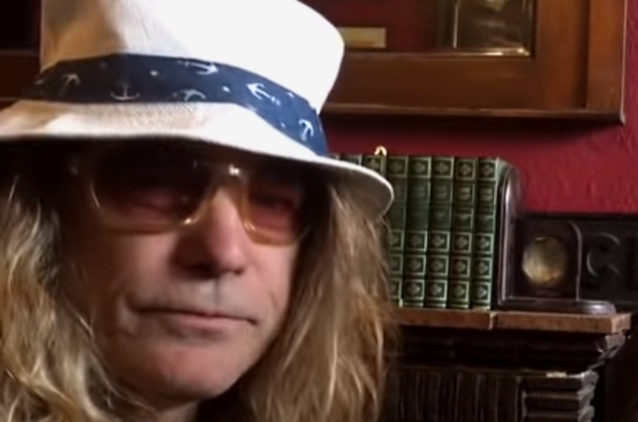 Dawn of Total Rock Radio recently conducted an interview with frontman Kory Clarke of veteran American rockers WARRIOR SOUL. You can watch the entire chat below. A few excerpts follow (transcribed by BLABBERMOUTH.NET).

Kory: "It hurts. I think people are going to catch it. [Laughs] It rocks. What can I tell you? Great reviews. Everything is going well with it and I hope it sells a lot."

On the writing process for "Rock 'N' Roll Disease":

Kory: "It comes from John Polachek, mainly the riff guy. I told him to put together three riffs for each track that they thought was good, him and Adam Arling from THE LAST VEGAS in Chicago. I happened to be doing a WARRIOR SOUL swing through the Midwest last April, and we got Adam's rehearsal room in Chicago and we just went in, I put mics in the drums, ate Mexican food, drank a couple of pitchers of margaritas, came back in and we tracked the whole thing. Ten tracks. No click, whatever, just slammed them. I used about six of those tracks on the album, with me on drums. Then, I did two tracks in Spain with Ivan Tamargo from Spain on drums."

On whether WARRIOR SOUL has gotten "heavier" over the years:

Kory: "Yeah, I think, especially the last two records, I've kind of gone dry, much dry and much more upfront and in your face. What all the rap guys brought in and flavor, so they want your vocals upfront, not so blended, hippie, psychedelic. Like 'The Space Age Playboys', that was like acid punk. I used a lot of cool chorus effects and different delays, which were really cool, but now it's more like 'Bam!'"

On whether WARRIOR SOUL translates better in front of U.K. audiences:

Kory: "For some reason, people in England like me a lot, more than Americans like me. I always thought it was because of my criticism of the social situation in America and the guts to actually say what I feel about it. But, you know, yeah, the English like drinking songs, so do Irish people. [Laughs] So do Scottish people. This album, 'Rock 'N' Roll Disease', the same way back on '[Back On] The Lash' was a drinking album, 'Rock 'N' Roll Disease' is just being addicted to rock 'n' roll and every song has a rock 'n' roll chorus or a theme or something to it."

On what the new song "War Ride Children" is about:

Kory: "It's about mainly the kids that are getting killed by the police in the U.S. for nothing, and the despair that's created by fascist government control and when you become a police state, which we are once again becoming, like we used to be in the late '60s. This is what 'War Ride Children' is about. Well, we'll see what happens in Spain. Don't try to lead the Spanish sphere of influence. like Barcelona. because the police will come in there and beat the crap out of you. We managed to get out of the Vietnam War eventually. A lot of it had to do with kids getting their heads busted [in]."

"Rock 'N' Roll Disease" will be released June 7 via Livewire/Cargo Records. The album was produced by Clarke and Adam Arling. It was mixed and mastered by Miguel Martins and engineered by Arling. The album artwork was created by Mark Procter.