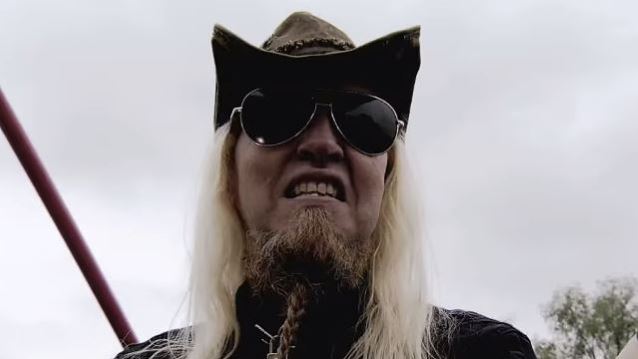 Josh Rundquist (a.k.a. That Drummer Guy) conducted an interview with SANCTUARY and NEVERMORE singer Warrel Dane on October 10 at The Triple Rock in Minneapolis, Minnesota a during SANCTUARY's current North American tour. You can now listen to the chat in the YouTube clip below. A couple of excerpts follow (transcribed by BLABBERMOUTH.NET).

On the progress of the songwriting sessions for SANCTUARY's follow-up to 2014's "The Year The Sun Died" album:

"Lenny's [Rutledge, guitar] gotta get off his butt and write some tunes for me, so I've got something to do in my bedroom when I'm alone with my computer and a microphone. He's got a bunch of riffs and some rough songs written. They're really, really good. It's the beginning stages of that.

"There was one song that got left off 'The Year The Sun Died'. I don't remember why we didn't record it, but it just didn't get finished. It's kind of… It's really fast and really brutal. I'm pretty sure it's gonna make it on the next one. He's got a lot of really good shit written. So it's just a matter of putting it all together and having me work out all the vocal melodies and the lyrics and everything. It takes a little bit of time."

On taking his 15th-anniversary tour of NEVERMORE's "Dead Heart In A Dead World" album to Europe after performing the LP in its entirety in Brazil earlier this year:

"I did that in Brazil with the band I have down there. And some European promoter guy saw some of the YouTube videos and found out I was doing that and wanted to bring it over there. [So I was like], 'Okay. Fine with me.' People went fucking apeshit in Brazil when I did that. It was crazy! Sometimes they were singing the words so loud that I could not even hear myself on stage. Brazilian fans are very into it — to the tenth power. They're crazy.

"[The musicians in my Brazilian band] are all very good, and they can play the shit perfect. It's gonna be fun.

"When NEVERMORE was all still playing together, we always talked about doing the whole 'Dead Heart' record at some point. The first time I went to Brazil and did a solo tour, I was playing mainly solo songs from my solo record and a couple of NEVERMORE songs and a couple of SANCTUARY songs, and people were always, like, 'are you ever gonna do 'Dead Heart In a Dead World', the whole thing? You've gotta do it. Please! People wanna hear it. I've heard that so many times down there. And I think it's the right time to do it, because it is fifteen years old. I can't believe that record is freakin' fifteen years old. It seems like yesterday to me. Time flies when you're getting old. [Laughs]"

On whether there is chance he will release a follow-up to his 2008 solo album "Praises To The War Machine":

"Yeah, I'm actually working on it now. I'm in the demo stages, and it's going to be different than the first one. Some of it is just brutally heavy. I mean, 'Praises To The War Machine' was more like a rock/metal record. I always wanted to do that — I always wanted to explore more of the rock realm instead of the progressive… whatever you wanna call what NEVERMORE was… Progressive, thrash, death, metal… I think NEVERMORE was pretty much… you couldn't really define what kind of music it was, and that was the good thing about that. But the new solo record is going to be a lot heavier than the first one. It's conceivable that it would come out in 2016, because I wanna start recording it sometime around March, but we'll see. I've gotta pick a producer. I'm leaning towards Zeuss [Chris Harris], 'cause I worked so good with him [on 'The Year The Sun Died']. There are a couple of other guys that the record company suggested, and I'm just kind of weeding through that."