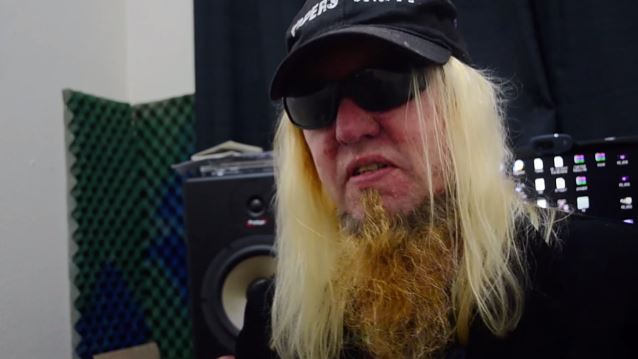 Iza Rodrigues of Menina Headbanger has produced a documentary about NEVERMORE/SANCTUARY singer Warrel Dane's recent Brazilian tour. The report on the "Dead Heart In A Dead World" 15th-anniversary Brazilian trek was recorded in São Paulo and São José dos Campos and can be seen below. A few excerpts follow (transcribed by BLABBERMOUTH.NET).

On the difficulty of performing some of SANCTUARY's early material live:

Warrel: "Sometimes 'Battle Angels' from the first SANCTUARY record, sometimes…. I love that song, but sometimes I know if I'm having a bad day, and maybe I won't sing it good enough for the people. So sometimes I hate singing that song when I know my voice feels bad. And then, every time I sing it bad, there's a YouTube video, right up there, or it gets on Blabbermouth — right away. Right away. Never the good ones, never the good performances — it's always the bad ones. People have to realize that singers are human beings. It's a flesh instrument. Sometimes you have bad nights. Sometimes you have perfect nights. The perfect nights never make it onto any kind of social media form ever."

On the recent departure of SANCTUARY guitarist Brad Hull:

Warrel: "The Brad Hull thing… I've known him for many, many, many, many years, and it's kind of a personal thing that I probably should not discuss in public. He's still my friend — I still will always be his friend — but there were just some things that happened that it's probably better not to discuss. [New SANCTUARY guitarist] Nick [Cordle, ex-ARCH ENEMY] was recommended by Zeuss [a.k.a. Chris Harris], the producer that did [the latest SANCTUARY album] 'The Year The Sun Died'. Because we were, like… At the last minute, after Brad said, 'I can't do the tour,' we had already bought his plane ticket and we lost a lot of money on that. And we freaked out; we didn't know what to do. Because we couldn't cancel the tour… SANCTUARY just did a tour in Europe with OVERKILL, and we couldn't cancel it, so we had to find someone very quickly when we found out that Brad couldn't do the tour. I still love that guy so much; I just wanna make that clear. And so, Zeuss found Nick for us. And it is… I'm guessing maybe one of your next questions is, 'Isn't it ironic, because of Jeff Loomis [former NEVERMORE guitarist] being in ARCH ENEMY now, and Nick being [in SANCTUARY]…?' It is kind of strange, but… Hey, Nick is a great guy — a great guy and a really, really good guitar player. I have no idea why he's not in ARCH ENEMY anymore, and I don't care. All I know, with my experience with him, he was great on tour, and he's a really good live performer and a nice guy. And, yeah, I'm pretty happy that we found him. I mean, Zeuss called up and said, 'Hey, I found the guy for you.'"

On the musical similarities between SANCTUARY and NEVERMORE:

Warrel: "People associate my voice with NEVERMORE. I think the music sounds absolutely nothing like NEVERMORE. The vocals, probably yes. And I think that's what it is. But the music is completely different than NEVERMORE. It's a lot more simple, it's a lot more song driven, it's not so progressive and all that stuff that made NEVERMORE what NEVERMORE is [and] was. So I completely understand the comparison, and I'm okay with that, but there's other people that kind of got a little annoyed when everyone started saying it sounded like NEVERMORE. It doesn't bother me."

On whether NEVERMORE is completely done:

Warrel: "No, NEVERMORE is not dead. I have secret plans. I had all the lyrics written for a new NEVERMORE record right after… When Jeff and Van [Williams, drums] both decided to leave the band… The band didn't break up. They left the band. I had all the lyrics written for the next [album] — all of them. [It was] kind of a conceptual thing and continuing with the tradition of all the NEVERMORE lyrics that were evolving and turning into a perpetual story. And there's a possibility that, yeah, there will be another [album]. There's support there from the record company, probably. There's support from other people involved in the business that would mean maybe it would be a good idea to do another one. So don't be surprised if there is a new NEVERMORE record within the next two years. But I don't know who will be in the band. All I can say is that I will be, Jim Sheppard [bass] will definitely be… I would love for Jeff Loomis to do it, but he's in ARCH ENEMY now, so I don't know if that's possible. Because we're not enemies. We don't talk much, but we're definitely not enemies. We didn't part on bad terms, so… We'll see."