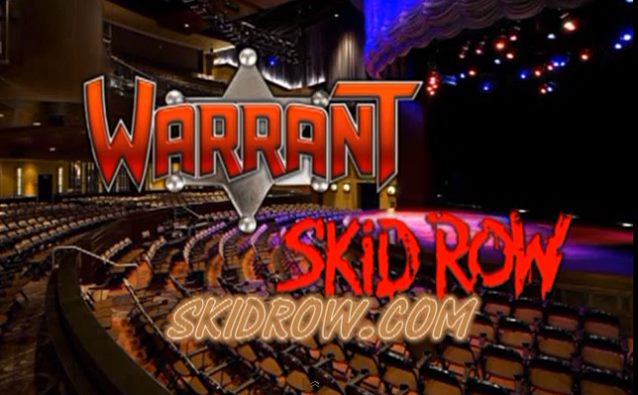 Brian Schenk of the KQCK radio station conducted an interview with members of WARRANT and SKID ROW when the two bands played at the Wild Horse Pass Casino in Chandler, Arizona on August 23. You can now watch the footage below.

In 2011, the band released "Rockaholic", their latest CD, on iTunes, and their singles "Life's A Song" and "Home" videos received a huge amount of success, which prompted them to launch their 21st-anniversary "Cherry Pie" tour with FIREHOUSE and TRIXTER.

SKID ROW's latest EP, "United World Rebellion - Chapter One", was released in Europe on May 24 via Germany's UDR Music. The European version of the EP includes two bonus tracks, both of them cover tunes: "Fire Fire" (EZO) and "United" (JUDAS PRIEST).

"United World Rebellion - Chapter One" sold around 1,500 copies in the Unted States in its first week of release. Released in North America on April 16 via MRI, the effort is the first in a series of EPs that the reincarnated band — Dave "Snake" Sabo (guitar), Rachel Bolan (bass), Scotti Hill (guitar), Johnny Solinger (vocals) and Rob Hammersmith (drums) — plans to release in the near future.