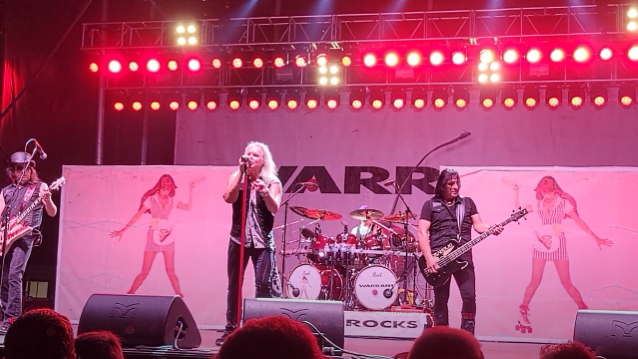 WARRANT performed without bassist Jerry Dixon last night (Friday, July 23) at the Hannibal Bar-B-Q Festival in Hannibal, Missouri. No reason was given for his absence. Filling in for him at the gig was Robbie Crane, who has had stints with Vince Neil's band, RATT and LYNCH MOB, before joining BLACK STAR RIDERS as a full-time member.

This past May, WARRANT singer Robert Mason was asked in an interview with the "Thunder Underground" podcast if there had been any talk of a follow-up to 2017's "Louder Harder Faster" album. He responded: "Not as far as a defined schedule, but we're always writing. In all candor, the focus for 2019 was the 30th anniversary of 'Dirty Rotten Filthy Stinking Rich' and that tour. And then, on the heels of that, in September of 1990, 'Cherry Pie' was released, so 2020 was the 30th anniversary — or is, [and] has been — for the 'Cherry Pie' record. So, in early 2020, we revamped the stage set, staging — everything — and were all set, like '1, 2, 3, go.' We stopped to do a 30th-anniversary-of-'Cherry Pie' tour, playing all, if not damn near all, of those songs as the focus. And, like I said, the light, staging, the whole vibe of it was kind of to pay tribute to the 30th anniversary and all the fans that love the 'Cherry Pie' record so much. So, I think we're just taking a mulligan — if you play golf, we're just taking a mulligan on 2020 and we're going straight in in June and beyond and go right forward to do a 30th-anniversary-of-'Cherry Pie' tour. So, once we feel that we've gotten that out of our system enough, we'll probably end up writing songs."

More than a year ago, WARRANT guitarist Erik Turner told the "Talking Metal" podcast that the group was "throwing some ideas around" for a new LP. He said: "I've been sending Robert some riffs, and Robert's been working on songs. I've got a song going with Jerry. So it's a slow, long process for us, but the seed of a new record has been started. Now, that doesn't mean the seed will grow into a record. We've got a long way to go. We don't have one finished song. We've got a couple of things cooking, and we're actually sending ideas around back and forth to each other."

"Louder Harder Faster" was released in May 2017. The disc was recorded with producer Jeff Pilson — a veteran bassist who has played with DIO, FOREIGNER, DOKKEN and T&N, among others — and was mixed by Pat Regan, except for the song "I Think I'll Just Stay Here And Drink", which was mixed by Chris "The Wizard" Collier (FLOTSAM AND JETSAM, PRONG, LAST IN LINE).

Mason replaced original WARRANT frontman Jani Lane in 2008 and has brought a degree of stability to the band after Lane's unceremonious departure and subsequent 2011 death.