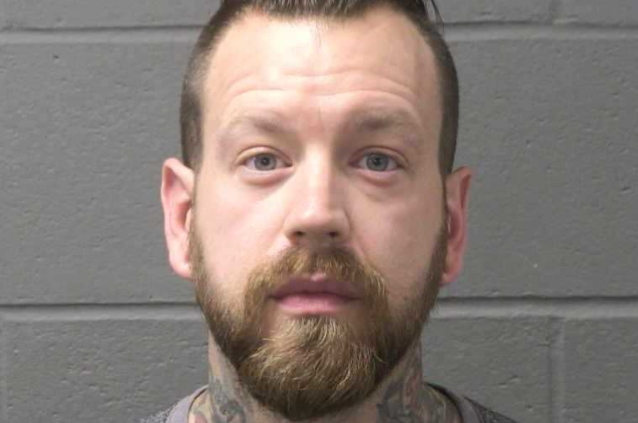 According to the Oregon State Police, WALLS OF JERICHO drummer Dustin Schoenhofer was arrested last week in Oregon with more than 600 pounds of marijuana and nearly 40 pounds of suspected butane honey oil extract in his pickup.

On October 23, at about 3:00 p.m., an Oregon State Police trooper stopped a 2015 Chevy pickup on Hwy 140E near milepost 15 for a traffic violation. During the traffic stop, the trooper obtained probable cause to search the vehicle. During the search, the trooper located 632.5 lbs of marijuana and 36.8 lbs of suspected BHO (Butane Honey Oil) extract.

The driver was identified as Schoenhofer, age 41, from Ohio. Through the investigation, investigators learned the marijuana and BHO extract was destined for Ohio.

"The driver stated he was going to Ohio with the truck but didn't know the marijuana was in the back of it," trooper Adam Miller wrote in his log entry.

According to the Mail Tribune, Schoenhofer is being held on $45,000 bail. Court records show the District Attorney's office objected to his entry into a county drug court program, citing "650 pounds of marijuana and no local connections," as its reasons.

The OSP Domestic Highway Enforcement (DHE) team routinely conducts illegal narcotic trafficking saturations throughout the state of Oregon. Their mission is to identify and disrupt all criminal conduct on Oregon highways and identify elements of drug trafficking organizations for further investigation and dismantling in cooperation with numerous law enforcement agencies not only in Oregon but several other locations within the United States.

A traffic stop in southern Oregon led to the discovery of 632 pounds of marijuana and nearly 37 pounds of suspected butane honey oil extract in an Ohio man’s pickup, according to police.