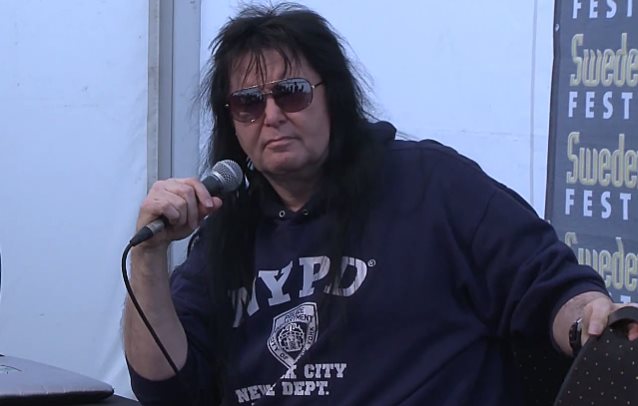 W.A.S.P. is "about three weeks away from finishing" its new studio album, titled "Golgotha", for an early 2015 release. During a press conference yesterday (Friday, June 6) before the band's performance at this year's edition of the Sweden Rock Festival in Sölvesborg, Sweden, W.A.S.P. mainman Blackie Lawless stated about the lyrical inspiration for the upcoming CD (see video below): "'Golgotha' is Hebrew for place of the skull, and it's the hill where Christ was crucified. And it's interesting, when you see a lot of bands going around using Satanic images or images of death and things like that, and I'm thinking, all they need to do is look at the source, 'cause it's right there. I mean, if you want death, there's enough to go around there."

He continued: "I don't know if you guys heard, I had a little hiccup last year, and that delayed recording for almost a year. I broke my leg. And that, too, was an interesting trip.

Lawless was also asked about his statements in past interviews that he will never perform W.A.S.P.'s classic song "Animal (Fuck Like A Beast)" live again because of his "religious faith."

"I look at it like this: I'm a representative of the most high God," he said. "But I have to be very careful about the things I say and do," he said. "I mean, I'm gonna answer one day for the things that I've done. And I wanna make sure that when I do, that my slate is clean. But equally as import as that, I think, is I've been given an opportunity to stand in front of people, and you're either gonna say something positive or you're gonna say something midnless; there's no in between — you're either one or the other. And I'm just trying my best. And I'm not saying that I'm doing it all the time, but I'm trying my best to say something that I think could help somebody's life."

He continued: "I remember on the first album [1984's 'W.A.S.P.'], we had a song called 'B.A.D.'. And a girl came up to me one day, and she says, 'I wanna thank you for that song.' And I said, 'What for?' And she says, 'Well, I used to be a really bad heroin addict. And when I heard that song, it changed my life and I don't shoot heroin anymore.' Now, that song had nothing to do with heroin; I don't know what she heard in those lyrics. And at the time, I really didn't wanna hear that, because, to me, I knew enough about what a statement from her like that meant. To me, that was the 'R' word, and I didn't wanna know about… The 'R' word, to me, was 'responsibility,' and I didn't wanna hear it. And I ran from that as far as I could. And then over a period of time…

"We got finished with the 'Inside The Electric Circus' record [1986], and I realized we had made one of the biggest piles of junk in the history of the recording industry. And I said, 'You know what?! That's it. I'm not doing that anymore. If I can't say something with the music, there's no point in me doing it.' And I thought, 'This girl is telling me she's not shooting heroin anymore, and I didn't even try. Imagine what I could do if I tried just a little bit.' And there's a ton of stories that you hear like that.

"You don't realize the impact that you're having on people. Because I'm one of those kind of people, I live in my own little bubble. I mean, I am one of the worst people to ask opinions about anything, because I just live in my own little space. If I'm not writing or in the studio, I live way away from everybody and I'm just in my own world. So you don't realize the impact you have on people a lot of times. I mean, when I'm at home, I have a ranch that… It's a pretty big piece of property, and I get out there and I just walk around and I'm just me. And I forget, a lot of times, until I go some place and somebody is interested, for whatever reason, in anything I might have to say. To me, that's always surprising. Because, quite honestly, I don't think it's that important. But apparently somebody does."

According to Lawless, the change in his lyrical approach happened with the 1989 release of "The Headless Children" album. He said: "There's a place, I guess, for all kinds of music, but for myself personally, I started looking around at what I felt was my purpose. And I thought music can be so much more than this. And I'm not saying that there's not a place for gusy to have a good time. But if I can do something to say something or help change somebody's life, I'm gonna sleep a lot better at night."

Blackie also spoke about his early life as a born-again Christian and his decision to leave the church at age 18, only to return to his Christian faith 20 years later.

"Like a lot of people, organzed religion was telling me things that I didn't see in the Bible," he explained. "And so, for 20 years after I left the church, I walked around with all these things that I had been taught, and I thought I was mad at God. And after 20 years, I realized I was not mad at God, I was mad at man for the institutionalized thinking that I had been indoctrinated with. And I discovered then, whether it's the Bible or anything else you ever wanna know in life, don't listen to somebody else telling you. You wanna find out, go find out for yourself, because ultimately you are going to be responsible for yourself. And so that's what I did. And when I did that, I realized, like, I wasn't mad at God anymore. These guys that had been telling me this stuff for the longest time, I realized that they had an agenda."