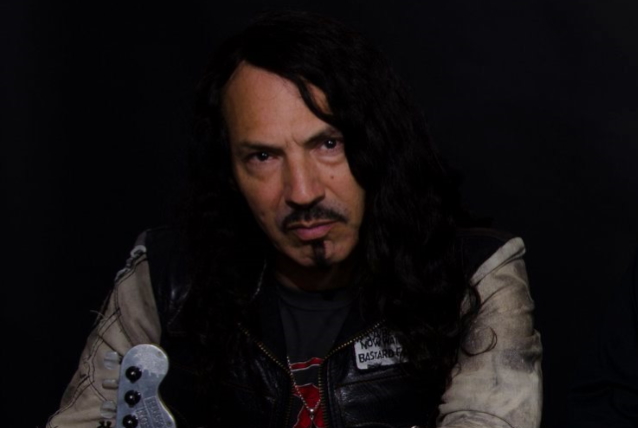 W.A.S.P. guitarist Douglas Blair has paid tribute to legendary guitarist and record producer Bob Kulick, who played on two of the band's albums, "The Crimson Idol" (1992) and "Still Not Black Enough" (1995).

Kulick died on Friday (May 29) at the age of 70. His passing was confirmed by his brother, former KISS guitarist Bruce Kulick. A cause of death has not been revealed.

In a statement issued earlier today, Blair said: "Bob's leads run through my veins — they're in my blood. I was already 29 years old, over the hill by those days' standards — and with what I'd say a fully-established lead guitar style — when I first heard Bob's lead to 'The Invisible Boy' from 'The Crimson Idol' in July of 1992.

"I'd flown overnight from [Connecticut] to L.A. to audition for W.A.S.P.'s coveted lead guitar spot. I was competing against a bunch of cool, hip rock dudes showing up in their pimped out rides... 'Learn this song' — and I went in the iso booth and learned it. Then we played it 10 times.

"From that moment was born a respect for a guy I hadn't heard of (yet), and really unfortunately, would never meet. Thriving at that time on heavy doses of Eddie Van Halen, George Lynch, Steve Stevens, Neal Schon, Warren DeMartini, Randy Rhoads et al, I knew about Bruce Kulick, but not Bob. Well, Bob's work has influenced my life and career more than any of those guys did, indirectly. I've played his leads thousands of times, onstage and in the studio. His lead in 'The Idol' — as one of rock's most iconic statements — has morphed into what I feel is an 'adopted child' of a lead. It makes me nervous, and feels like the very first time EVERY time I play it. Maybe that's Bob reaching out through my ESP EC, to his audience that never saw him play it onstage in W.A.S.P. I'm more than happy to oblige and be a surrogate for that kind of emotion and power, and now I play it for him — I almost got to, at a KISS Expo in Helsinki last year, but he cancelled at the last minute.

"So many have worked with Bob, many musicians I've also worked with — his touch spanned far and wide. But playing his leads from 'The Crimson Idol' on every tour, throughout several 'The Crimson Idol' anniversary tours, and on the 'Re-Idolized' record of 2018, gives me a unending respect for his talent and abilities — and a feeling that somehow it's a bit of destiny, that it was just meant to be. This man I never met.

"Yet destiny has brought several chances to work with his wonderful brother, Bruce. What a musical pair of brothers, that have influenced so many others!

Blair was originally a member of W.A.S.P. for a short time in 1992. He was also a quick replacement on W.A.S.P.'s "Unholy Terror" tour in 2001 on two festival gigs when Chris Holmes left the band. Blair rejoined W.A.S.P. in 2006 and has played with the group ever since.