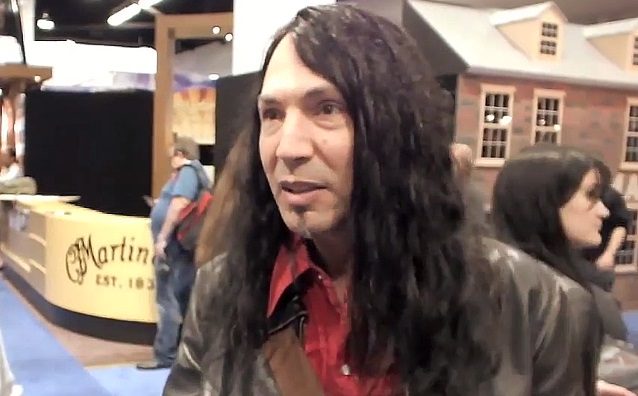 Vince Boncamper conducted an interview with W.A.S.P. guitarist Doug Blair at a hotel lounge in Finland in June. You can now watch the chat in three parts below.

Asked about the state of the U.S. rock scene, Blair — who was originally in W.A.S.P. for a couple of years starting in 1992 before rejoining the group in 2006 — said: "It's been [going down] for a long time. And we have many of our contemporary bands — a lot of my friends, [like] guys in STAIND, guys in SEVENDUST — really great bands, and they've never really made the transition to get their feet on the ground here in Europe. Unfortunately, there is a diminishing number of venues you can play [in the U.S.], and the people that go out to see the music are getting older, so less people go out, so it's, unfortunately, shrinking. There's kids [that] love AVENGED SEVENFOLD, and lots of good, young bands are coming from the States, and [the kids] go out to see 'em, but there isn't the connection between young bands and the older bands like us as there is here in Europe. There seems to be this smooth bridge [in Europe]; kids love the newer, younger bands, but they also love MOTÖRHEAD, and they wanna go see IRON MAIDEN, and they wanna go see W.A.S.P. or whatever, or KISS. [In the U.S.] there seems to be a big chasm, or a big rift between… The kids love AVENGED SEVENFOLD, but they don't really care about going to see KISS; they're [considered] dinosaurs. I think the marketing has something to do with it, too. If you wanna go see KISS in America, you've gotta pay so much money, the kids can't afford it, so it doesn't work, ['cause] the kids can't go. The way that the festival environment is here [in Europe], those big bands can be on festivals. And kids love to go to festivals, and they save up and they can afford to go to a festival, and not only see those bands, but they see a bunch of really good younger bands too."

In a March 2014 interview with Prog Metal Zone, Blair spoke about W.A.S.P.'s increased touring activity in the last few years: "Since 2006 there's been an upwards arc of [W.A.S.P.'s] popularity, especially in Europe. Because of that, we've been slowly spreading farther into different regions."

Asked if he thinks the social media has made a difference in raising W.A.S.P.'s profile, Blair said: "I don't know if that applies to us because we're not using it very much for our promotion. We're real strict, old-school promotion. Tour, put out a record, promote the record, press. We've got a bunch of unofficial Facebook sites and we've got an official web site, but it's not maintained or really used as a super-promotional tool. It's more of a research thing. You can go back and see the history of the group. You can see what's going on now, but it's not used to update and push the thing forward. We rely on our work."

He continued: "We always try to push the envelope and say, 'How can we be better this tour? How can this record be better?' We really have always tried to push ourselves because we see that the market has a lot of potential right now.

"In Europe, the kids have always gone through a rite of passage of getting into MAIDEN and MOTÖRHEAD and all the groups, and that hasn't ended the way it did (in America). So there's kind of an unlimited supply of younger ears and younger hearts. The genre connects with young people in a way that they can express themselves, so it's not a genre that's gonna go away. It's not looked at as only 'dinosaurs doing it,' like, unfortunately, it is over here (in America)."

At a June 6 press conference at this year's edition of the Sweden Rock Festival in Sölvesborg, Sweden, W.A.S.P. mainman Blackie Lawless revealed that the band was "about three weeks away from finishing" its new studio album, titled "Golgotha", for an early 2015 release.