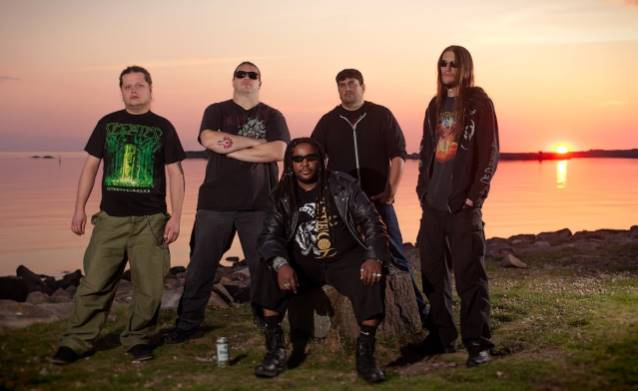 "Renaissance Of Retribution", the new video from VOODOO GODS, the death metal project led by African drummer Alex Voodoo, can be seen below. The song is taken from the band's new full-length album, "Anticipation For Blood Leveled In Darkness", which will be released on July 28. The CD, which features contributions from former and current members of CANNIBAL CORPSE, SEVERE TORTURE and VIRGIN SNATCH, was mixed and mastered by KING DIAMOND guitarist Andy La Rocque at his Sonic Train Studios in Varberg, Sweden.

A 14-minute trailer for "Anticipation For Blood Leveled In Darkness" can be seen below.

According to VOODOO GODS ' official bio, "This band shares metaphysical conceptions based on a dual cosmological machinery of art. You could describe VOODOO GODS as 'the serpent under whose auspices gather all who share the faith' and music is the vehicle for the expression of the serpent's power. Their music is an expression of spirituality, of connection with divinity and the spirit world."