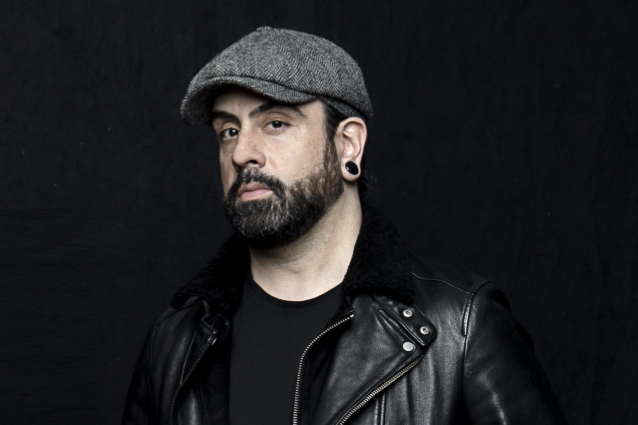 In a recent interview with Sweden's RockSverige, VOLBEAT's Rob Caggiano named AC/DC's "Back In Black" and VAN HALEN's classic first album as the two records that made him want to become a guitar player. "I was a huge Eddie Van Halen fan," he said. "He's my favorite guitar player. Eddie and Angus [Young] are my two favorites."

Asked if he was ever fortunate enough to meet Van Halen and Young, Rob said: "I've met Angus and he's a super-cool guy. I met him on the 'Stiff Upper Lip' tour in New York and I talked to him for, like, 45 minutes. He was trying a new amp that night, I think it was a Wizard amp or something and we were just talking about his tone and he was really into what I thought of the sound that night, which was crazy. He's a really nice guy. And very recently, I actually got to work with Brian Johnson. I produced a record [Jim Breuer's 'Songs From The Garage', 2016) and he sang on one of the tracks that I wrote, so he's actually singing my lyrics, which is insane. It's called 'Mr. Rock 'N' Roll'."

Rob went on to say that working with Brian was an "amazing" experience. "[He is a] super-nice guy and very professional," he said. "This was a few months before the whole thing happened with AC/DC [not being able to tour with Brian due to the singer's hearing loss] and everything got weird. He was great to work with and he did his tracks really quick and then he invited us to his house and cooked us an amazing steak dinner."

Asked if he ever gets starstruck while meeting famous people, Rob said: "I do. It depends on who it is, obviously. Usually I don't, but someone like Brian… The vocals on 'Back In Black' are my favorite rock and roll vocals, and to be able to work with him was crazy."

VOLBEAT has just released its seventh studio album, "Rewind, Replay, Rebound". The disc was produced by longtime collaborator Jacob Hansen and co-produced by Caggiano and frontman Michael Poulsen. This marks the first studio album with Kaspar Boye Larsen on bass.