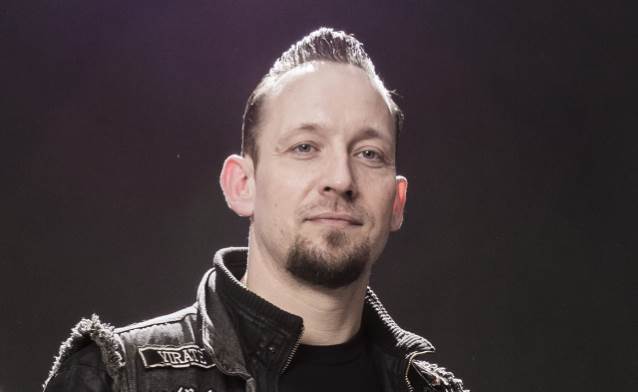 Prior to VOLBEAT's May 29 performance in Manchester, United Kingdom, singer/guitarist Michael Poulsen spoke with Heavy TV. The full conversation can be viewed below. A few excerpts follow (as transcribed by BLABBERMOUTH.NET).

On the group's recent tour with METALLICA, and what they've done since then:

Michael: "We've been out on the road many times with METALLICA, and each time, it's been a pleasure and a great experience and lots of fun. We finished that stadium tour with METALLICA in the U.S., went back home to Europe and did our own headlining stadium tour and took a half-year off. I just got a baby daughter one year ago, and at the same time, I used a lot of time writing new material. So, I've been home being a dad and at the same time writing new songs. Of course, you need to reload your batteries. At least, you're home, so you're comfortable when you sit and write. Everything's been quite smooth."

On when fans can expect to hear those new songs:

On whether he's written anything for potential side projects:

Michael: "Right now, it's all VOLBEAT songs. I do have things at home — I can pick up some few death metal riffs here and there. I've got so many good friends in the death metal scene, and I've been talking to some of them to one day, when the time is right, sit down and write some old-school death metal. When that's going to happen, I don't know. It will happen; it's just timing is everything. But so far, I'm concentrating on writing those new songs for VOLBEAT."

On why the group recorded Danish- and English-language versions of their song "For Evigt":

On covering other artists' music:

Michael: "We always just pick one, and if it works in the rehearsal room, then we record it. That's the way to do it. We've been talking a little bit about if we should do another cover version of something. We always end up doing something, but right now, we really don't know, so let's see what happens."

On whether it's difficult to play guitar and sing at the same time:

Michael: "I started out in a death metal band growling and playing guitar. It was quite easy for me to do that. It got more complicated when I started singing for some reason. I'm not taking anything away from the death metal singers, because I've been there, and it's not easy. You have to have a certain talent to be a good death metal singer. There's just some technique that [is] a little bit more difficult when it comes to singing and playing guitar at the same time. There [are] riffs that are more easy to sing on top of than others. Sometimes, when I'm sitting and writing, I'll be thinking, 'Man, why am I playing a guitar? I should only sing on this track.'"

Michael: "Rob is a really talented technical, skilled guitar player. I think what he brings to the VOLBEAT sound is something I've been looking for for a very long time. It adds something, and it still sounds like VOLBEAT."

"Seal The Deal & Let's Boogie" was released in June 2016 via Republic Records. The album featured the single "Black Rose", which landed at No. 1 on Billboard's Mainstream Rock Songs airplay chart. It was the second track from the disc to top the list. The LP's first single, "The Devil's Bleeding Crown", reached No. 1 in May 2016, while the follow-up single, "Seal The Deal", got as high as No. 3 in December 2016.