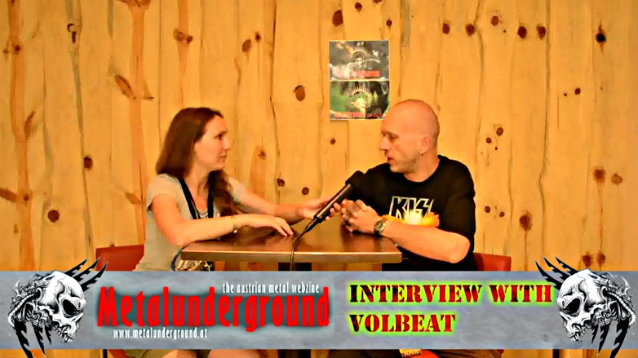 MetalUnderground.at recently conducted an interview with drummer Jon Larsen of Danish/American metal rock 'n' rollers VOLBEAT. You can now watch the chat below.

Asked about VOLBEAT's plans for the remainder of 2014, Larsen told Finland's Kaaos TV: "For this year, we're gonna be on the road for most of the year. Once we're done with the whole festival season, which ends in late August, we're gonna head back to the U.S. and do this tour with FIVE FINGER DEATH PUNCH for, like, six weeks, and then we're gonna do a small U.K. tour in November, and that's pretty much. That's the end of this year and that's, actually, the end of the 'Outlaw Gentlemen' cycle, so to speak. And I think after a bit of holiday, we will probably start working seriously on new tunes. I mean, Michael [Poulsen, VOLBEAT guitarist/vocalist], of course, is already starting, he's already adding stuff and pieces, he's already thinking about artwork, titles, songs… he's already way ahead of that. But we're gonna start up probably either late December already maybe or definitely early January and lock ourselves in the rehearsal room and try to come up with some new stuff."

Larsen has been with VOLBEAT since the band's inception and 2005 debut album, "The Strength/The Sound/The Songs".

He explained the group's musical philosophy in a recent interview: "One of the philosophies that we have is actually that the simple solution, simplest music is always the best solution actually. Because everybody can relate to it if it's simple. If you listen to stuff like DREAM THEATER and stuff like that, which is very technical music, it's much harder to get into bands like that. It's much easier to get into like a simple punk rock song. Everybody can understand that."

VOLBEAT will be out in support of its fifth album, "Outlaw Gentlemen & Shady Ladies", which was released last year.

The group's latest single, "Dead But Rising", is the sixth track from the band to reach the Top Three at rock radio.