Danish/American metal rock 'n' rollers VOLBEAT have announced a spring 2015 tour with special guests ANTHRAX and openers CROBOT. A pre-sale goes live on October 29 at 10 a.m. local time in all markets, and can be accessed by all Rebels’n’Angels members. On Halloween, general on-sale begins at 10 a.m. in all markets excluding Grand Forks (9 a.m.) and both Oshawa and Ottawa which will go live at noon.

Over the past two months, VOLBEAT has been drawing near-capacity crowds in arenas with co-headliner FIVE FINGER DEATH PUNCH. Their return to North America in 2015 will feature multiple Canadian dates, alongside appearances coast to coast in the U.S.

Additional shows will be announced soon.

Current VOLBEAT guitarist Rob Caggiano announced his departure from ANTHRAX in January 2013 to focus on his other passion: producing records. The following month, it was revealed that he had joined VOLBEAT after serving as producer on VOLBEAT's latest album, "Outlaw Gentlemen & Shady Ladies", alongside longtime production partner Jacob Hansen, who produced and mixed the band's prior four albums. Caggiano's other producer credits include THE DAMNED THINGS, BLEEDING THROUGH and ANTHRAX, and he was a member of ANTHRAX for two tenures — from 2001 to 2005 and again from 2007 to 2013.

Speaking with SROMaginc.com, VOLBEAT drummer Jon Larsen said that the group will take an extended break before beginning work on a new studio album. Larsen explained that after the band wraps its current U.S. tour, "We're gonna go to the U.K. for ten days. And after that we have six months off for the first time in two years. So we're gonna start focusing on writing new stuff."

Larsen added that while no full new songs were written, "Michael [Poulsen, guitar/vocals] is already starting and planning, and having small bits and pieces. And once he's put some flesh on those bones, he and I will go to the rehearsal room and try and get [the songs] into shape and then the two other guys will come in."

"Outlaw Gentlemen & Shady Ladies" has sold 252,000 copies in the U.S. The set features the No. 1 singles "The Hangman's Body Count" and "Lola Montez", as well as the Top 5 track "Dead But Rising" and new single "Doc Holliday".

VOLBEAT performed on Sunday (October 26) at Knotfest in San Bernardino, with SLIPKNOT and others. 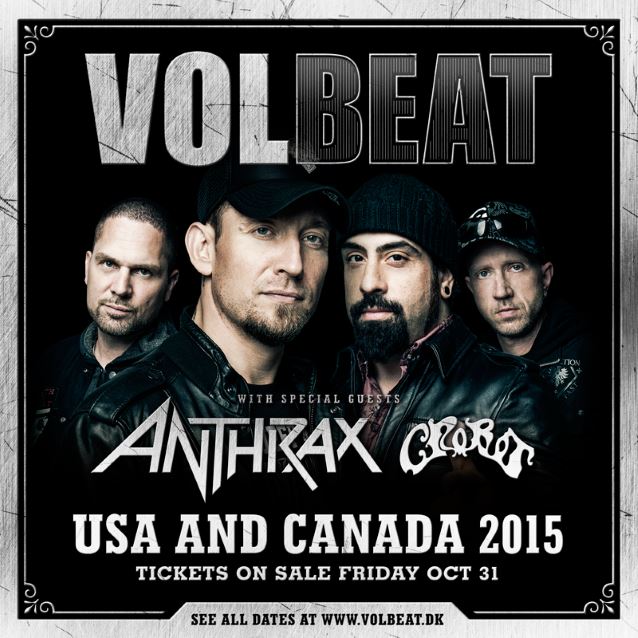