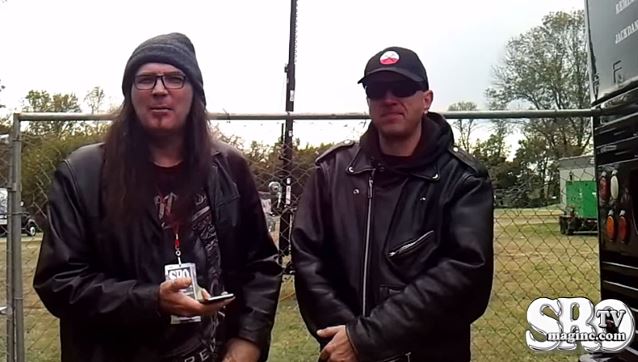 SROMaginc.com conducted an interview with drummer Jon Larsen of Danish/American metal rock 'n' rollers VOLBEAT at the inaugural installment of the Louder Than Life festival, which was held on Saturday, October 4 and Sunday, October 5 at Louisville Champions Park in Louisville, Kentucky. You can now watch the chat below. A couple of excerpts follow (transcribed by BLABBERMOUTH.NET).

On VOLBEAT's plans for a new studio album:

Jon Larsen: "[There's] not really any new music in the works. I mean, we still have three weeks left of touring here in the U.S. and then we're gonna go to the UK for ten days. And after that we have six months off for the first time in two years. So we're gonna start focusing on writing new stuff. Michael [Poulsen, guitar/vocals] is already starting and planning, and having small bits and pieces. And once he's put some flesh on those bones, he and I will go to the rehearsal room and try and get [the songs] into shape and then the two other guys will come in, and we may end up with music. Who knows?"

On the VOLBEAT songwriting process:

Jon Larsen: "I'm kind of like the guy that Michael bounces his ideas off, back and forth, and we've done that almost ever since the beginning. It's no secret that he comes up with, let's say, 99.9 percent of all the material, but if any of the rest of us has an idea and he thinks it's good, then he will use it, of course. But he is the main songwriter. I mean, it's his band."

VOLBEAT's latest effort, 2013's "Outlaw Gentlemen & Shady Ladies", has sold 252,000 copies in the United States, according to Nielsen SoundScan. The set features the No. 1 singles "The Hangman's Body Count" and "Lola Montez", as well as the Top 5 track "Dead But Rising" and new single "Doc Holliday".