There's only one Wacken Open Air. Nothing heats up the summer quite like the world-renowned festival in the north of Germany. 2012's edition saw heavy hitters like VOLBEAT, EDGUY and TESTAMENT tearing up the stages, with 75,000 moshing metalheads in attendance. The atmosphere was unique as always, the party legendary — and now you can be there, too! Relive the planet's biggest heavy metal festival in all its glory on DVD (Amazon) and CD (Amazon), hitting stores on February 18, 2014 in the U.S. and Canada.

"Live At Wacken 2012" features the best performances, filmed and recorded right there at the Holy Wacken Ground, culminating in a mindblowing headliner set by rock's brightest phenomenon — and regular Wacken guests — VOLBEAT.

See them welcome Mille Petrozza (KREATOR) and Michael Denner (MERCYFUL FATE) on stage for "7 Shots" and inviting Barney Greenway (NAPALM DEATH) to growl in "Evelyn", before they launch their classic "Pool Of Booze, Booze, Booza". Watch HAMMERFALL setting "Hearts On Fire", TESTAMENT going "Over The Wall" and THE BOSS HOSS "Riding High, Singing Low", while SAXON swing the "Hammer Of The Gods", OVERKILL are "Rotten To The Core" and CRADLE OF FILTH go "From The Cradle To Enslave".

The 3-DVD-set features 60 tracks from 25 bands as well as a 20-page booklet — that's four and a half hours of music! The double-CD gives you 32 songs by 13 groups, ranging from HAMMERFALL, CRADLE OF FILTH and SUFFOCATED to THE BOSS HOSS, SCHANDMAUL and VOLBEAT. 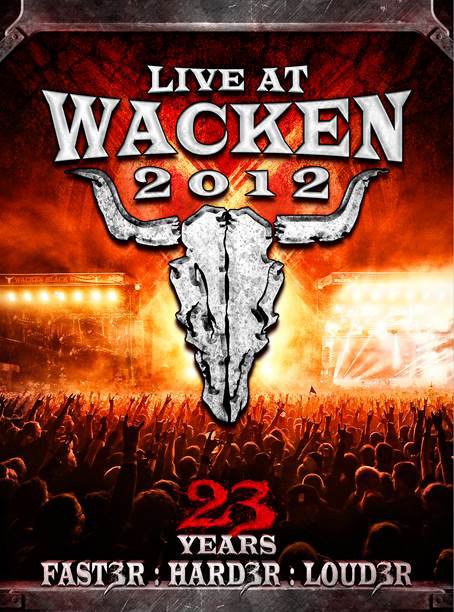