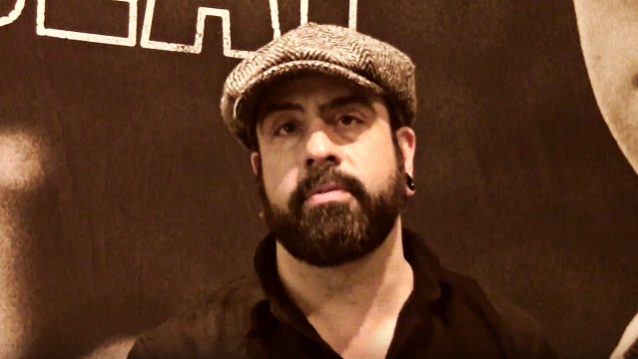 Prior to VOLBEAT's October 14 performance in Milan, Italy, guitarist Rob Caggiano spoke with Linea Rock. The full conversation can be seen below. A few excerpts follow (as transcribed by BLABBERMOUTH.NET).

Rob: "There is no formula with this band. I think that's one of the things that makes it a lot of fun. The bottom line, what we really tried to do as a band, I think we all made a conscious decision to... just speaking about what we tried to accomplish with the record, we wanted to take all the elements of the VOLBEAT sound and kind of push them further, and try some different stuff within that sound. I think we did that. I think we definitely ended up with an album that we're all really proud of. For example, the 1950s-'60s rock 'n' roll influence that's always been a part of this band, I think is even more authentic on this record... Some of the stuff, the melodic stuff, might be more melodic, and, of course you have your heavy tracks as well. There's also the rockabilly influence... I think we're pulling from a lot of different places, and there's really something for everyone on this record."

On how the album differs from its predecessor, 2016's "Seal The Deal & Let's Boogie":

On how to maintain your identity while expanding your palette:

Rob: "We're the type of band that doesn't like to repeat ourselves. We don't want to do the same record we did last time or the same record we did 10 years ago, even though that's before me. VOLBEAT is always progressing. We're just getting better at our craft and what we're doing. With the new album, maybe some people got confused, but the bottom line is that if you listen to the record as a whole, it is VOLBEAT. Some people wrote to me, 'Where are the heavy songs?' But now, having listened to the record for a few weeks, the same people are writing me, 'This is our favorite VOLBEAT album.' Just give it a chance. Everything is there — it really, really is... VOLBEAT was never really a metal band. It's a rock 'n' roll band with metal influences and country influences and punk influences, rockabilly, whatever it is. All that stuff comes out in the music. That's the bottom line... As a band, we're getting better and better at what we do as musicians and songwriters. It's definitely something you spend a lot of time on, and I think we're very proud of the songs on this record."

On how a New Yorker managed to fit in so well with a Danish group:

Rob: "We all grew up listening to the same stuff. We're really coming from a similar place musically. There's only 12 notes in the type of music that we play. We're all playing the same notes. It doesn't matter where we grew up or where we're from, so we connect a lot on the music front."

On his introduction to and first impressions of VOLBEAT:

Rob: "The first time I heard VOLBEAT, we were doing a band called THE DAMNED THINGS. It was, like, 2009, 2010. We put out a record and we went on tour, and VOLBEAT was one of the bands that were nice enough to take us out on the road. That was the first time I heard their music. We'd just heard, 'Oh, this is a band from Denmark and there's a lot of hype on them — a lot of excitement,' but we'd never heard the music. I heard them the first time and connected with it instantly. I just heard all these influences in their sound that I personally loved — the MISFITS, Johnny Cash, the METALLICA vibe. I connected with it right off the bat."

On joining the band:

Rob: "We were already working on the record 'Outlaw Gentlemen & Shady Ladies'. That's what was originally going on — I was called in to help produce and record the record. It just felt really natural when it happened in a really, really cool, organic way. I think it just made sense."

Rob: "One of the things I wanted to do from a production perspective was really make it sound like a powerful, two-guitar-player band along the lines of JUDAS PRIEST, IRON MAIDEN, stuff like that. For the most part — I'd say 98 percent of the records that I'm part of — it's my guitar on the left and Michael on the right... We tried it out on the 'Outlaw Gentlemen & Shady Ladies' record, and it worked really, really well, so we kind of stuck with that. It just makes it sound... the personality gets bigger and a little bit heavier, I think."

"Rewind, Replay, Rebound" was released on August 2 via Republic. The group is currently in the midst of an extensive tour of Europe, a trek that also features BARONESS and DANKO JONES.