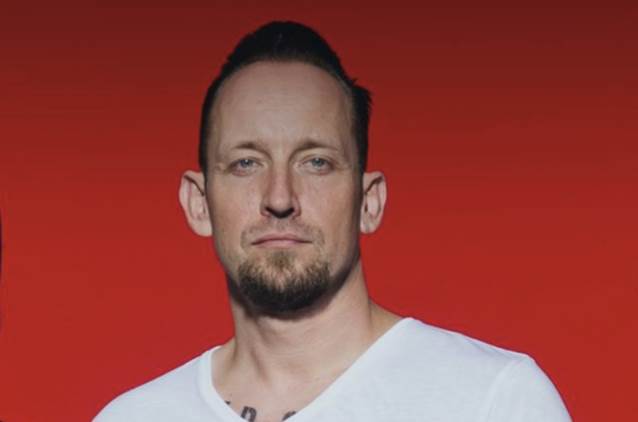 Prior to VOLBEAT's July 6 performance at the Rock For People festival in Hradec Králové, Czech Republic, vocalist Michael Poulsen spoke with Metalshop TV. The full conversation can be seen below. A few excerpts follow (as transcribed by BLABBERMOUTH.NET):

Michael: "Great guy, huge inspiration and very down-to-earth. I've been listening to KING DIAMOND since I was very young. Even before I had my first guitar, I was listening to KING DIAMOND. So many years after, having the opportunity to go and make a record and have King Diamond on one of the tracks, that was something I could not imagine. That was a dream come true. We became really good, close friends and are still in very good contact. When we talked about making a song, it came very natural and very easy. Of course, when you write a song for King Diamond, it has to be heavy. That was a lot of great fun. I remember writing half of the song backstage while we were on tour, and then when I came home, I finished up the rest of the song. We went into the studio and sent the files over to King. I was waiting for a couple of days. It was like waiting for a big Christmas gift or something. The results came back and were amazing. I almost got tears in my eyes because he's been such a huge inspiration. I'm very proud of it, and everybody in the band is really proud of it. It seems like one of those songs that fans really dig. It stands out. It turned out great."

On touring North American stadiums with METALLICA in 2017:

Michael: "We had the opportunity to tour with METALLICA lots of times. We've been very spoiled when it comes to that. Last year was a crazy year — to America, going on tour with METALLICA again, but not just doing it again — doing it in the U.S.' biggest stadiums with the biggest heavy rock band. [I'm] very proud of that, and I'm very thankful to METALLICA. They're good people; they're very professional. There's always a trick or two to learn. We do have the same management now in Q Prime, so it's nice to work with a big team in America. There's always stuff to learn. Even though VOLBEAT is about to get old, there are still things to learn from great, legendary guys like the guys in METALLICA. I think they're still an amazing live band. Lots of respect for keeping that energy and the hunger. You've got to take your hat off to that."

On the status of the group's next album:

Michael: "When we're done with this festival run, we will go home. That's time time when we put all the pieces together. I wrote tons of songs. I got half-songs; songs that's already finished; I think I have lyrics for maybe five or six songs right now. We have to go through a lot of material. There's probably maybe five songs that we can already play right now. But as always, we write a lot of material, and we pick the best 13, 14 songs out of, I don't know, 30 or 40 songs. There's a lot of material that's actually being trashed. Maybe some of it will be picked up later. When it comes to B-sides, I still think it has to be just as good quality as what you put on the main record. For us, why we make B-sides is if there's a certain song which I don't think fits into the whole perspective of the record, then we make it a B-side. But we like making strong B-sides, and we do play our B-sides songs live. You just have to fit the record. It's too early to say right now how it sounds. I can only promise you one thing — it sounds like VOLBEAT, and it should. We are not trying to be a new band for each record. We are VOLBEAT; we have a lot of signature. At the same time, we try to come up with stuff that we haven't done before, but still, when you have [a] signature sound and a certain style, it's also very recognizable. People will immediately hear, 'Okay, this is definitely VOLBEAT.' But there will definitely be surprises, like always. I can't wait to go into the studio, because I think we've got some really strong material and very interesting material. So far, I'm very proud of what we have. We're going to enter the studio [in] late November, so there's going to be a new record out next year."

On the new song "The Everlasting", which VOLBEAT has been performing live at various shows over the course of the last year:

Michael: "It was just one of the songs that I finished up first. It came to me very easily, and since it really worked out great in the rehearsal room and I came up with the lyric quite fast, it was something nice to bring to the road for the people to hear something from VOLBEAT they haven't heard before. It definitely has that kind of '80s, thrashy thing — heavy stuff. There's a lot of inspiration in a song like 'The Everlasting'. I think people can definitely hear the METALLICA, DIO, BLACK SABBATH inspiration. But that's just one of the songs on the [new] album. We see it as a keeper. There's going to be elements that have similarities on the album that we have in 'The Everlasting'."